You are here: Home>People>Celia Kendon 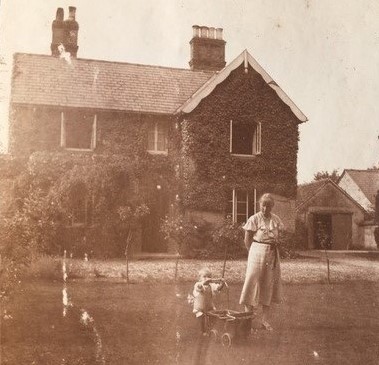 We received an email as below from Janet Tivy in Nov 2018 asking about her uncle and aunt who used to live in Harston.

My uncle’s name was Frank Kendon, born in the 1890s in Kent—he was a poet and worked at the Cambridge University Press. He and his family (wife Celia who ran a nursery school out of their home, and four children: Alice, Adam, Andrew and Adrian) lived in a large house named Beechcroft (a large beech tree in the front of the house) on the main road in Harston. My brother and I stayed there for months during WW2 as our house in South Devon was considered more dangerous. We have such fond memories of our visits there and would be pleased to hear any memories of them and the fate of the house.

The following is what we put together from various records that we already had but would be delighted if anyone can add to it. Celia obviously played a large part in the village community.

Elizabeth Cecilia Horne (B:1907) married Frank Herbert Samuel Kendon 1930, in Cranbrook, Kent. He (B:1893) had studied literature at St John’s College, Cambridge 1919-21 and later joined the staff of the University Press at Cambridge (CUP) in 1935. 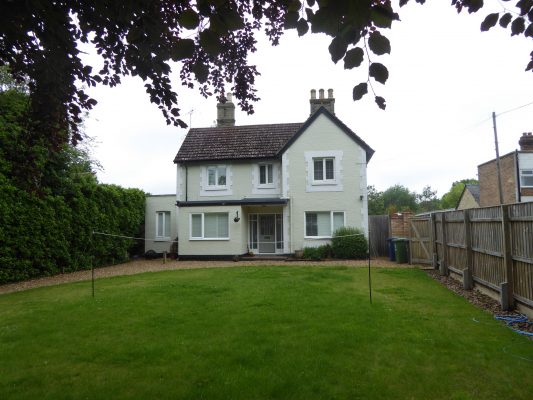 Kelly’s Directory show that the Kendons lived at Beechcroft 117 High Street from at least 1937- may have been as early as 1935. Her husband Frank had died in 1959, residence recorded as Beechcroft. She was Secretary of the Infant Welfare Centre in Harston until 1960 so we assume she was still at Beechcroft then.

Memories of two of Celia’s ex pupils tell of how she ran her school.

Janet Bennett (nee Hill) recalls: The village school took children from 5-15 years of age (some rather rough boys) and outside ‘earth closets’ so my parents decided I should go to a little private school across the road ‘Beechcroft’ (117 High St ) run by Mrs Celia Kendon. Her husband Frank, was editor of The Cambridge University Press. 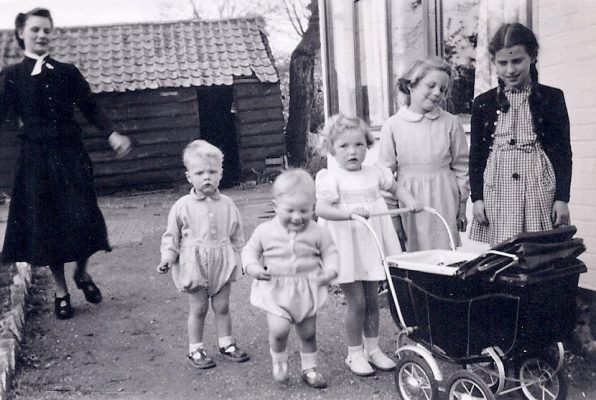 Mrs Kendon was a Froebel trained teacher. She had started the school for her own children- Adam, Alice, Andrew and Adrian – in her own house. We would walk past the big Beech Tree to the left, then past Beechcroft house and yew trees to the two school rooms, in the garden to the right behind the house but not attached to it. There we had lessons and news, the younger children sitting on black cushions on the floor in one. The older children had tables in the dining room to work on. It was a small school, at a guess about twenty children. It was such a happy place and I’m sure it influenced my desire to become a teacher.

Beechcroft school often used topics to help the children learn. I can remember shoe-making where we actually used pieces of leather and learnt how to make them. Another topic was the Post Office- a sewing machine made the perforations for the stamps. Stone Age people was another. It was all very magical. 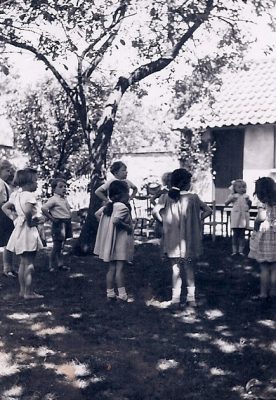 1948: Pupils in front of classrooms behind Beechcroft

We used to go down the Drift (lane opposite) to a field with cowslips in it which we used to pick. On 24 June, mid-summer day, Celia earlier in morning went to The Drift & field opposite Park House- and set out a ‘fairy’ ring of the black cushions we usually sat on. There we had our milk and biscuits and were given little presents. Celia’s birthday was in February and she always held a wonderful themed party for we children. Everyone wore fancy dress, one year nursery rhymes, myself as Miss Muffit, another year flowers.

When we were at Beechcroft various other people came to help, some were Celia’s friends, some students – girls- I remember one taught dance- maybe in holidays and I remember Mrs Ripper trying to teach me to write ‘2’. Celia was a very busy person and even cooked meals at school for us children every day, as well as running the house and looking after the garden, although she did have a gardener called ‘Norkey ‘.

The names of some of my class were: Andrew & Adrian Kendon, Judith & Anne Hurrell (from Newton), Martha & William Hurrell (cousins), Robert Reynolds, Cecil?, Sarah Roddis, Nicola Townley (father was a doctor), Valerie ?, Catherine & Vanessa Ripper (daughters of Dr Ripper).
For several reasons, by the time two of Ceilia’s older children had left, and after I had been at Beechcroft for 2-3 years, the school moved to Park House further along the High Street, home of Col. and Mrs Hurrell, Martha & William. It maintained its happy atmosphere. 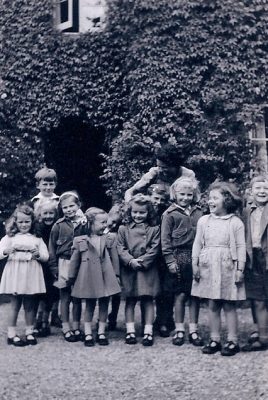 Some of Beechcroft pupils with Barbara Kendon behind

We left Harston on November 5th 1954 but I stayed as a ‘boarder’ with Ceilia Kendon to finish the term at the Perse.

Ruth Pitt, born in 1941, remembers when she was six she cycled to Mrs Kendon’s private school at Beechcroft, 117 High St, Harston.
Mrs Kendon was a lovely woman who had three sons all named beginning with A- Adam, Andrew and Adrian. The latter was Ruth’s age so they would play together. There were about 25 girls and boys at the school which was in a big house with a big beech tree there (probably 130 years old in 2016).

In the back garden were classrooms which seemed modern at the time- not sheds or converted barns. Ruth remembers going into one for Nature study. Once Ruth stayed for a meal in the big dining room at the front of the house. Ruth enjoyed the geography lessons there as they would act out what they knew about the countries outside – playing Indians for one country and drinking coffee, not very nice, in small cups, like the arabs did.

Mrs Kendon’s memoirs showed she was asked by the chair of the Nursing Association, Miss Powell, in 1936 if she would help set up an Infant Welfare centre and as she had appreciated help with her first child when she lived in Hampstead she felt it a good idea. Miss Powell gathered together a group of people in Mrs Kendon’s house, Beechcroft, to form a committee. Mrs Kendon to be Secretary/treasurer and they all agreed it would be Harston & District Welfare Centre with members on the committee from each village – Harston, Haslingfield, Newton, Foxton, Hauxton, Lt shelford. It opened 10 September 1936. 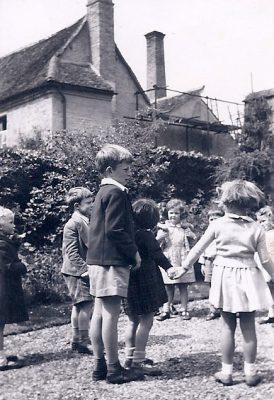 The Health Dept of the Rural District Council gave £10 for funds annually, the rest being collected annually from subscriptions but it would be free for mothers to attend. The £10 bought the equipment, the hire of the hall, which was the Oddfellows Hall, for Doctors fees, the expenses of a dentist who came once a month, and of a speaker who was asked to speak on various subjects. Then they engaged Mr Whitchurch to run his car round the villages to collect the mothers who found the walk each way too tiring or too time consuming. There was a system for the sale of baby/child foods which didn’t receive grants but paid its way. The idea was that the mothers came fortnightly, had a cup of tea and a bun for which they paid. The children were weighed and examined by the nurse, helped by the Secretary and the Committee and the doctor there once a month. They needed one room for mothers to sit in and for children to play; one for children to undress in so can be weighed; one for doctor; a kitchen where they can make tea.

Mrs Kendon, the Secretary for 24 years until 1960, kept a record of the weighings, and any expenses incurred and produced two yearly balance sheets, one for Ministry of Health and one for County Council. The Secretary was there as often as possible as mothers saw her as friend they could confide in. Records also show that in 1941-2 one of talks at Infant Welfare centre was ‘Finances of an Infant Welfare Centre’ by Mrs Kendon and in 1942-3 thanks were given to Mrs Kendon as Secretary, giving much time & care, and capably running the centre.

Every year Mrs Kendon’s husband dressed as father Christmas & gave out presents (once bibs wrapped as crackers) to each child at their Christmas party.

As numbers of mothers attending increased, this made the Oddfellows Hall inadequate and the Centre moved to Newton for a time, then later to the Billiards room in Harston Village Hall, with rent paid for by Health Service. Celia said officialdom came in a big way when the Health Service began. There became no time or money to get the friendly local dentist, they were no longer able to get people to give 10 minute talks on nappy changing, wisdom of feeding methods, etc, and as clinic days were once a fortnight, if mothers needed food in between they had to go to Mrs Kendon’s house to collect it. She begged Mr French, County Medical officer, for a silver spoon for the thousandth baby registered but to no avail, other clinics had been set up long before Harston’s cosy set–up.

In addition to running a school, sometimes with the help of her cousin Barbara Kendon, she was also involved in the Harston Drama Group which had started in 1949. In March 1952 she took part in a Drama Festival at Fulbourn, playing the role of Elizabeth Darcy in ‘A Wedding at Pemberley’. Her cousin Barbara helped produce that play and another play ‘A Matter of Fact’ in the same festival. In Nov 1952 Celia took part in the Harston Players programme of two one Act plays, playing a maiden sister in ‘Mr Sampson’ while cousin Barbara produced the plays. In April 1953 she took part in ‘A quiet Wedding’ while Barbara again was the producer and she took part in ‘A quiet Weekend’ in 1954. In Dec 1953 she played Lady Angkatelj in ‘The Hollow’. 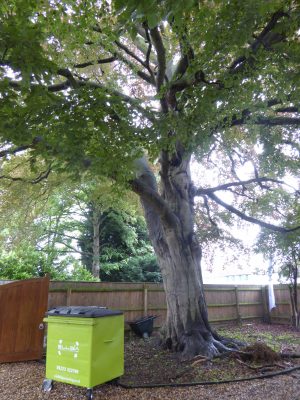 Thank you so much for giving personal memories of Celia Kendon, my aunt, and Beechcroft. It is good to see that it still survives in its original form although I am sorry to see the driveway and yew hedge gone, taken by a path to the rear(is this correct?) We had such fun hiding in the hedge, and the two classrooms, garage, greenhouse are gone as well, I presume. Just a brief correction: the photo which states it is Celia Kendon with her pupils is not actually Celia, maybe an assistant? I am also emailing a photo of Celia with me (!) in 1936 or 1937, showing part of the house. I was amused to read about my uncle Frank dressing up as Father Christmas, about the last thing I could imagine him doing as he was not the gregarious type at all. It is great that you are so active in restoring and continuing Harston’s history, and I have enjoyed reading and recollecting a few memories of my childhood months there. Greetings from USA. Janet Tivy

Thank you Janet. We have amended the 1950 photo of children with pram at the school and discovered it was Vicky Jones, a helper with two of her children – younger boys, two ‘Hill’ sisters and another girl Gill Rushbrooke.

You are correct in thinking the outbuildings have gone. There is now a lane to right of the fence and several new houses have been built on the land behind about 10 years ago. The 2016 photo is taken of the house from the front garden. The old beech tree is still there.