You are here: Home>People>Iris & Terence Armstrong 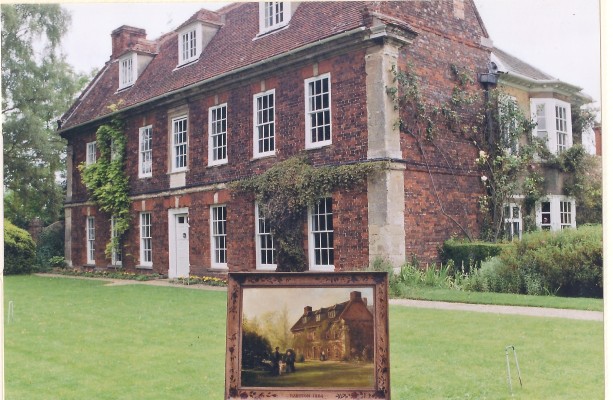 Iris Forbes was born A-J 1921 in Surrey. She married Terence Armstrong in 1943. Iris had been a dancer when Terence had first seen her, dancing through the war for ENSA (The Entertainments National Service Association).

As Harston was convenient for Terence’s work at the Polar Research Institute, in 1953 Harston House became their home and that of their children Kevin, Benedict, Deidre and Damaris and a welcoming haven to countless others. 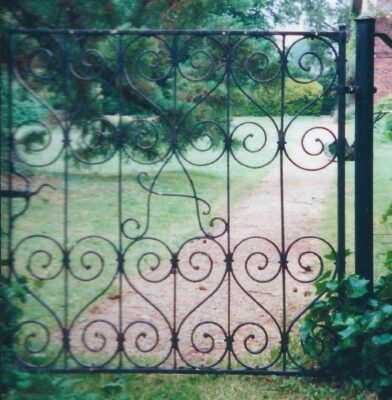 Harston House gate with A for Armstrong made by Harry Lawrance

The Armstrongs gave weekend work to a number of Church Street children who appreciated the pocket money but also being allowed to roam freely and play in the woods of Harston House. As Iris gave ballet lessons they were not allowed to cut the lawn on Saturdays to ensure they weren’t disturbed by the noise. The children also enjoyed The Armstrong’s big November bonfire in the field (now Stockers) at the back.

Iris also ran the legendary playgroup at Harston House where generations of little Harstonians learnt to dance, sing & make bread. Iris worked with Joan Rivers and Margaret Hancock for many years running the playgroup there for 3 year olds and over. She said they used to go in the music room where Iris played so children could sing songs, do the actions and dance. Jenny Tooley remembered her children never wanted to miss a Tuesday when they would be making bread and eating it!

In Feb 1986 parish magazine, Iris wrote: “Harston House Playgroup is in its 15th year, having been started by Iris Armstrong (inspired by a 60 year old unemployed rocking horse) in September, 1971.

We were (and are) registered for 14 children, and became a member of the P.P.A.

For the first two years the playgroup was organised by a nursery school teacher, Ann Rochester, and we still follow her pattern for the morning: free play interspersed with structured activities (bread making is one of the most popular!). Most important of all she taught us to let the children develop through gaining confidence in themselves and enjoying group play.

We are very fortunate in having a large garden with exciting “jungle” patches and small trees they succeed in climbing – incidentally the writer Graham Greene played here during his childhood.

We are open 5 mornings a week from 9 to 12. At the moment, due to the new school intake of four year olds, we have a small group of children. We have 5 helpers (Iris Armstrong, Margaret Hancock, Shirley Hollyer, Joan Rivers and Mary Thorp) and a secretary/Treasurer (Christine Luffman)”.

On the 8 May 1974 Iris also started a Mums and Toddlers Group at Harston House. June 1990, however, saw the last session of the Harston House playgroup.

Meals on wheels to Lunch club

Iris took a very active role in providing a meeting place and meals for the older people of the village, expanding on earlier ideas. In July 1964 she asked for W.I. helpers when the old people from Chesterton Hospital were making their annual visit to Harston for the Garden Party on 14th July and included the ‘The over sixty club’ in the invite. Around 1976 Iris helped found, with the help of Vida Fletcher, and run the Lunch Club, a meeting point and recreation for many retired people in Harston. 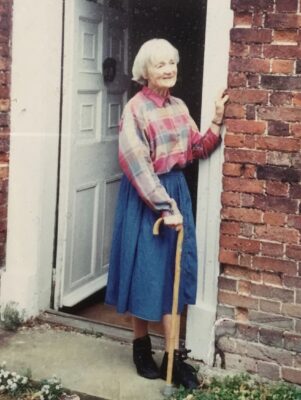 Iris made a real commitment to the community in Harston and in the year after they moved in Iris agreed to hold the W.I. garden fete in her garden in July 1954.

Iris loved poetry, music and dance and directed plays, sometimes staging vastly ambitious productions such as the Bartered Bride. In September 1956 Iris appealed for greater W. I. support for the Drama Group, with a view to entering two plays for the WI Drama Festival in 1957. In March 1960 for the W.I. birthday night Iris wrote and produced a one act play ‘All for Art’ and in October that year at the W.I. Harvest Supper she presented a play ‘High jinks at the Johnson’s’.

Nora Sellen wrote in 1965 in the WI scrapbook for the village:
Since Dr & Mrs Armstrong have been at Harston House, tradition (of past pageants, plays, dancing & festivities in the garden by the Greene sisters) is served and the school of dancing started by Mrs Armstrong in 1958 continues under the tuition of Mrs Janet Hales of Barrington. Children still dance in the garden and each year the WI have the pleasure of entertaining visitors from Fulbourn and Chesterton Hospitals. Madrigals in the garden and the magic of the spring evening, the Easter Egg Hunt which brings joy every year to small fry, exhibition of drawings and paintings, Oxfam sales …… all combine to make Harston House a focal point and to place it as a source of inspiration to service.

Prepared to tackle other issues

Although they already knew Terence Armstrong before they moved to Harston, because of their Polar Research connection, Peggy & John Heap got to know Terence & Iris Armstrong well and the Armstrong’s children babysat for the Heap’s children. Iris ran a ballet class in Harston House that Peggy’s daughter Alice went to. Iris was a truly caring person and helped a lot of people ‘when in need’ and also actively did a lot for the parish church, including helping keep it going when it went through a rocky patch. Summer church fetes were regularly held in the gardens of Harston House. Peggy remembers the 1993 party held in village Hall to celebrate Iris & Terence 40 years in Harston.

Always an ear to listen

Iris made a huge contribution to the welfare of others. Harston house became a place of refuge for people in need, where there was always an ear to listen and a teapot brewing. Joan Rivers said Iris worked for the Samaritans – people knew they could contact her – and collected socks for men for a homeless charity. 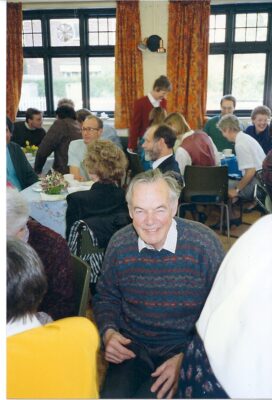 Celebrating the life of Iris and Terence in Harston

In 1993 a party was held in the village hall to celebrate the 40 years that the Armstrongs had been serving the community in the village. A great picture of Terence but none of Iris, sadly.

Terence died 21 Feb, 1996. In the April parish magazine was a tribute to him:

Terence died suddenly on Ash Wednesday. In his funeral sermon, the vicar spoke about the qualities that undergirded all that Terence did.

”Think for a moment about Terence’s outstanding scholarship, which did so much to establish the international reputation of the Scott Polar Research Institute, and won him so many friends all over the world. High academic esteem and considerable personal affection don’t always walk
hand in hand – but in Terence they did.

Or think of the way he attended to detail. Serious scholarship and the laughter that erupted from his unfailing sense of humour don’t always walk hand in hand – but in Terence they did.

Think about Terence’s achievements during the War. Think of the way he pioneered the study of the Russian Arctic. Think of all he did to encourage scholarship and research. 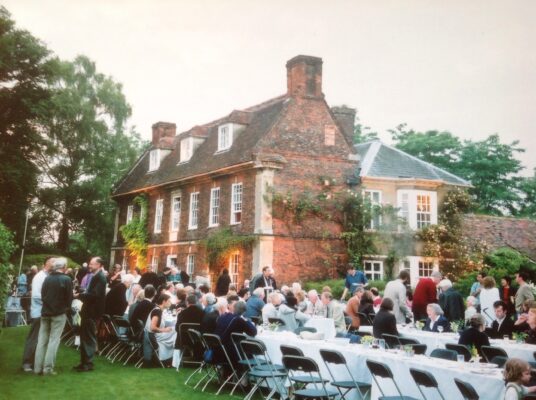 Think of his ability as a musician. Great achievement doesn’t always walk hand in hand with modesty and moderation and humility – but in Terence it did.

Or think about Terence’s international stature – he and his work have been appreciated and trusted all over the world. Playing on a world stage, and deep commitment to the life of a village and its parish church don’t always walk hand in hand – but in Terence they did.


Great achievement, accompanied by geniality and generosity, humour and humility, modesty and moderation. That was Terence the man. 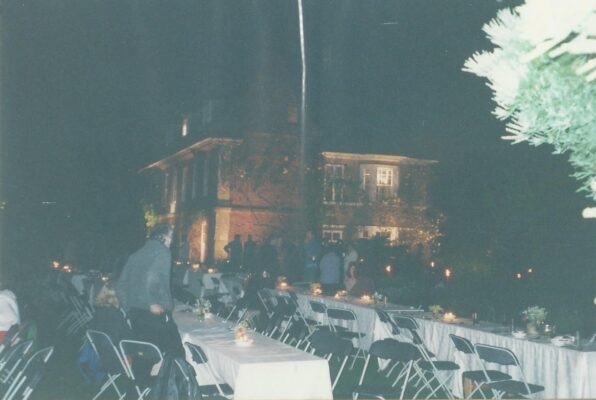 At the heart of it all we find Terence’s family and his faith. Terence and Iris have known one another for almost the whole of their lives. Their home and family have long been characterised by welcome and warmth, stimulation and support. Their deep Christian faith has played a considerable part in making them what they have been. And we, together with many others, have received so much as a result.

It’s been said of Terence that ‘whatever he put his hand to was changed for the better’. No-one could have a finer epitaph. And for all that we are deeply thankful. In the faith of Jesus Christ that lived in him, we are privileged today to be able to entrust him to God’s unfailing care and keeping”. 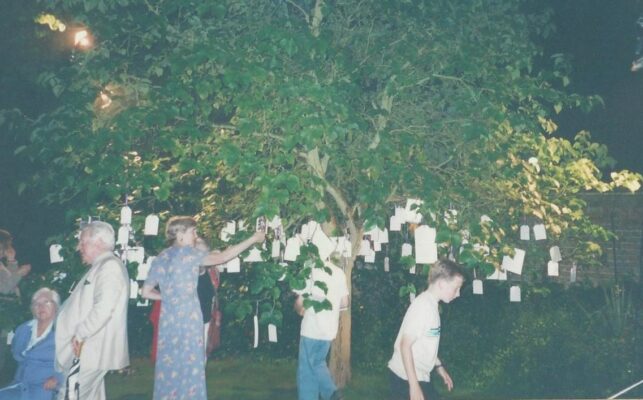 An invitation to all to come to Harston House on 1st July 2000
The Armstrong family want to thank everyone in the village for being so welcoming to all Armstrongs and their guests, who often came from different countries and cultures. In particular we thank the many people who were so supportive of Terence and Iris through their last, less mobile years in the village. Harston people showed themselves to be a truly caring community.

The Armstrong family invite anyone who has had a connection with Iris and Terence Armstrong to attend a concert for Iris and a Harston House Farewell Celebration (The family has been here since 1953) on 1st July 2000. 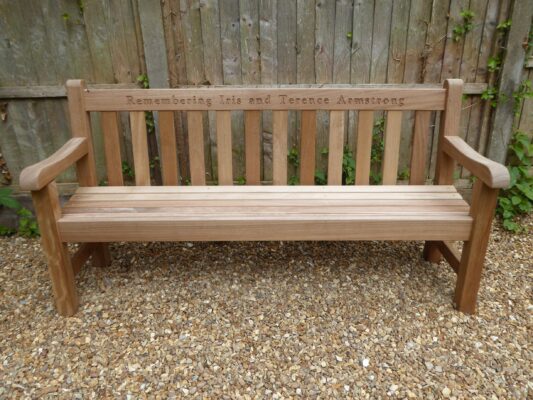 We haven’t sent out individual invitations so this article is your invitation, and please come.

We will be making the mulberry tree into a Tree of Memories where people can attach labels with brief reminiscences. We will appreciate contributions very much as there is so much we do not know about Terence and Iris’s life in the village since we left home. You can use parcel labels or make your own. If you can’t come, send them to the house and we’ll attach them to the tree.
Please let us or Peggy Heap know if you are thinking of coming.

The photos show the success of this evening and how many villagers appreciated what Iris and Terence had done for Harston’s community. 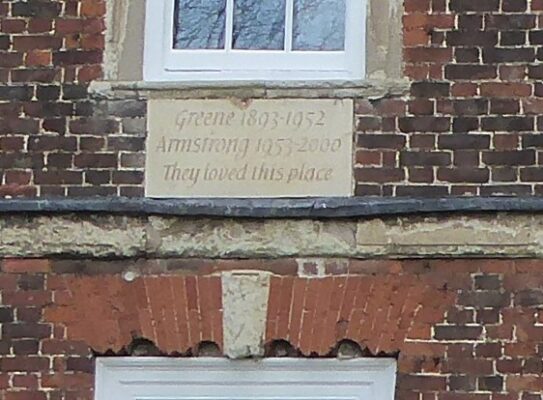 A stone plaque is now found above the front door of Harston House commemorating the Armstrongs time in Harston. There is also a bench in the churchyard dedicated to Iris and Terence.