Mary Charlotte Greene, known to the family members as Polly, was born in Takeley, Essex in 1860. She was a delicate child and, as a result, had little schooling. Her passion was painting and she spent some time studying art at the Colarossi Academy in Paris where she lived with her younger sister Helen. She also trained at the Royal Academy in London.

However, a family decision that she should live in Harston was greeted with dismay. She has written ‘I should be cut off from the full artistic life that made me so happy in London and Paris. My student friends were genuinely sympathetic with me over my fate. They said that from an artistic point of view, Cambridge was a regular hole of a place and surrounded by impossible country. I wandered over the countryside looking for subjects to paint and found none that I cared for.’ 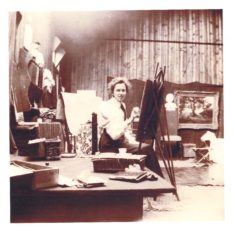 Mary Greene in her studio in Harston House grounds

However, as her mother became interested in village affairs, so did Mary and she became happier. She started to teach art to four children once a week at The Old Vicarage in Grantchester. She walked each way, claiming that the Harston to Trumpington road was lonely, bare and treeless with no hills on either side to break the wind and no rise higher than the Gog Magogs eastwards until the Ural mountains break the great Russian plain.

Around 1900 she started to walk daily into Cambridge, claiming that she was the first of the villagers to do so – others only travelling on Saturdays by train when fares were cheap. By this time her sister Florence, now widowed, had returned to Harston and looked after Harston House. Mary states that ‘Harston no longer needed me although I lived there. I had made no attempt to get work in Cambridge but Cambridge had called me to it and I love the place.’ 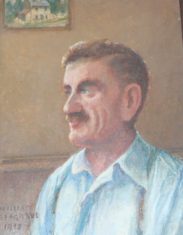 She established a studio off St Andrew’s Street where she held many exhibitions. She was a member of the Cambridge Drawing Society from 1894-1929 and its President from 1926-29. She had at least one exhibition in London as she recounts the tale of when her paintings were transferred to London in a lorry owned by Mr Seagrave (of Harston) who she accompanied in the lorry with her two Swedish helpers. She taught Charles Darwin’s granddaughter, Gwen Ravarat, who became a leading wood engraver.

In Cambridge, her early paintings were watercolours of landscapes, buildings, backstreets and old courtyards, many of which have disappeared. Many of these are housed in the Cambridge Folk Museum and the Cambridge Collection. Others are in private hands, some still in Harston. She also produced portraits of Harston residents and drawings of Harston buildings.

She spent much time sketching and painting at Coe Fen in Cambridge. It has been claimed that her passion for the place influenced the Local Authority who agreed to preserve its rural aspect.

By now she had started to travel to Cambridge in a chaise which had been bought for her mother. It was only about nine inches from the ground and pulled by a slow, fat pony called Peggy. Later still she relied on the bus as her sight had failed in one eye and she was also very deaf. She continued to paint and draw up to the end of her life but the scale and scope was much reduced as she concentrated mainly on sketches of children, animals and trees and flowers in her garden.

Her nephew, the author Graham Greene in his book A Sort of Life describes her as ‘dear muddled-headed Polly who painted bad pictures and wrote ambitious plays for the village institute (the whole conflict between Christianity and Paganism in Northumbria she managed to contain in a one-act piece with fifty characters).’ This description is probably unfair but does highlight the other element of Mary’s life – her contribution to Harston village. 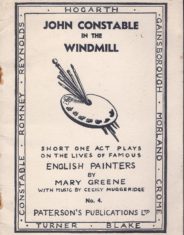 Mary and her sister Helen became leading figures in supporting village activities, the first of which was to raise funds for a village hall. Helen wrote and produced plays whilst Mary wrote the songs, painted the scenery and dressed the actors. Larger scale pageants followed and Mary wrote a fairy play to suit the Harston House garden and the following year, a haunted one to suit the Manor House garden. Mary wrote the words for subsequent pageants based on village history. Mary said that their efforts raised a considerable sum towards the building of the village hall, completed in 1923.

Shortly after this, Mary fell ill and had to remain in bed for two months. During this time she wrote a series of one act plays about an episode in a famous painter’s life. She also wrote plays and prologues which were performed to raise funds for the newly formed branch of the Women’s Institute.

Mary took a great interest in the garden of Harston House in which she, along with the other family members, had responsibility for a certain area, always under the watchful eye of the gardener, Ernest Northrop, who she describes as ‘its despotic ruler’. Mary’s area was the dell with its woodland. She also designed four of the wrought iron gates in the garden, all made by the village blacksmith, Harry Lawrance.

Mary died on 17 December 1951 and is buried with her sister Helen in Harston churchyard.