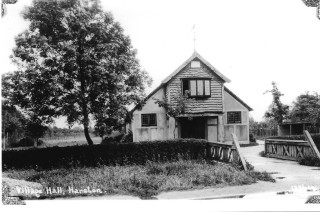 After WW1 over a 1000 village Memorial Halls sprang up all over the UK.  So many men had lost their lives that those remaining wanted a better life to come home to – where they could enjoy some leisure time and have a village community/meeting place. Harston had its WW1 war memorial provided by public subscription in 1920 but locals soon decided they also wanted a village hall.

The idea of meeting in their own hall was first started by the Womens Institute (formed in 1920) who had already collected £200. They contributed this money to a general Village Hall Fund. Entertainments and large fetes at Whitsuntide in 1922, 23, 24 raised money for the building of the Village Hall. Practically the whole village was involved in one way or another. The pageants that formed the chief attraction each year (produced by the Greene family) absorbed some 200 men, woman and children and were attractive enough to draw large numbers of people from Cambridge.

The Hall was opened in 1923, followed by a concert in the evening by the Westminster Singers. The architect was Mr E B Bentham and the builder was Clem Jude. It was a large hall built of brick and plastered and in 1937 seated about 250 people. Behind the main room was a billiard room, a small committee room for the men, and a lobby and kitchen. The Hall’s charter incorporated the ideals of the National Council of Social Service and was run on the lines suggested by them. The chairman from the beginning was Sir W. Graham Greene who had taken an active part in fundraising. He was also one of three trustees, the other two being Dr Young and Mr H Smith. The General Council represented the various village societies who met at the village hall or held their entertainments there and from their number an executive committee was elected. In 1937 these societies included the Tennis Club, Cricket Club, Bowls Club, Badminton Club, Horticultural Society (which held its big show every year in the Hall), The Nursing Association & Infant Welfare, The Hospital Aid Association, The Women’s Institute, The British Legion, The Girl Guides & The Boy Scouts, Harston Operatic Society (producing one of Gilbert and Sullivan’s operas each year) and The Harston Players (Mr Lennard producer).

The Greenes were great philanthropists and continued to contribute ideas, such as Helen Greene’s history book sales, to raise further funds for roof repairs in 1930s. The National Council of Social Service offered a grant if matched by local donations- trustees (Greene & Young) guaranteed payment. A Sub-Committee to raise funds was suggested by Harry Lawrance who organised many dances and whist/beetle drives.

Once War was declared Sep 1939, the Committee decided to close the hall. From May 1940 Military Authorities commandeered the Hall and had use of billiard room, tennis courts & bowls area. They connected the Village Hall with the Village Water supply. The Village Hall had, however, to pay for reconnection to the mains in 1947.

After the military occupation, the first general meeting of the VH was held in May 1946. Compensation for military damage was used for repairs and to close open space in the roof of the main hall to improve heating. The worn out range in the Committee Room was replaced by the temporary loan of a slow combustion stove offered by Miss Mary Greene and installed by Mr Lawrance.

In April 1947 a New Management Scheme was adopted with 14 new members elected instead of 28 – only half from social organisations and the rest by more popular representation, voted in at the AGM. Sir W Graham Greene retired (age 90) after many years as chairman as did Helen Greene (age 77) from The Council.