You are here: Home>People>Peggy Johnson 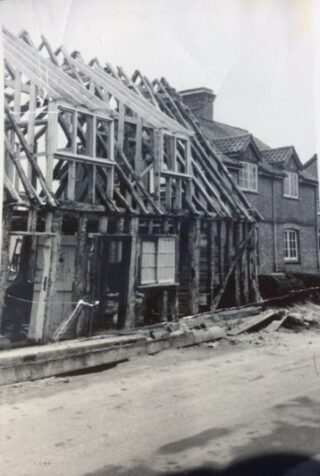 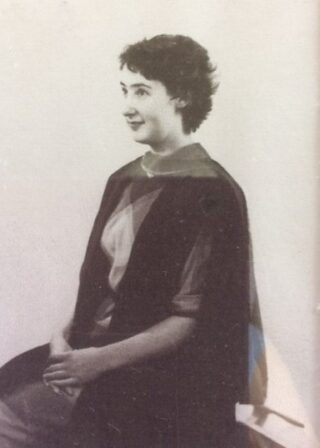 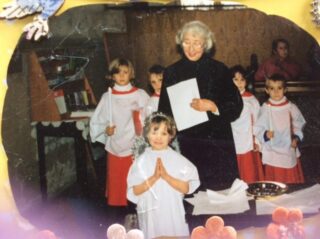 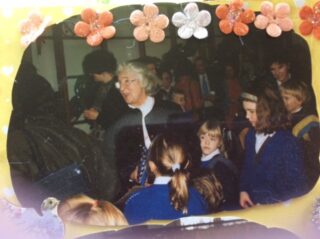 Peggy sadly died during lockdown in 2020 (19 April) and was buried in Button End Cemetery (28 April) alongside her late fiancé. Previously she had been staying near her sister in Yorkshire after her brother had stayed and supported her in her failing health for a while in Hope Cottage, Button End.

Roger Thornton: I have unfortunately very little in the way of ‘hard’ information for Peggy – she was actually quite a private person. A few things I do know :
She was Headmistress at Bassingbourn school – she must have retired about 20 -25 years ago.
She was an extremely strong advocate for the teaching of reading for young children and wrote extensively on the subject – she was always ‘very busy’ with the great work and her house was full of documents relating to this. I am not sure if it ever made it to publication.
She had an amazingly detailed knowledge of building techniques and understood many of the intricacies of maintaining and repairing an old building like Hope Cottage.
As a younger women she travelled and lived in Africa.

Chris Bates wrote in July 2016: Hope Cottage is the only thatched cottage now remaining in Button End. It is very old, although no-one knows exactly how old. In the early 1970s, Peggy Johnson, the current owner, with her late partner, James Stokes, had Hope Cottage stripped right back to its wooden frame, and it was then restored to its present state. While this was happening, Peggy ‘lodged’ with us at 8 Haslingfield Road for several years, before our daughter was born in 1974.

Peggy herself wrote the record below of the Parish Council tree Planting Project in Burial Ground in 1998.

A notice had been put in the village magazine by Oct 1994 asking for volunteers to help with improving the appearance and setting of the cemetery and had number of replies. South Cambs did much work in 1995 to get a Countryside Tree and Hedge pack from Cambs County Council and had submitted plans for their location in Harston Cemetery. The planting scheme was put forward by Val Ford, Jed Roberts & Peggy Johnson (Hope Cottage, Button End). The Council agreed to fund the scheme for £350 as long as they made sure they didn’t impact on (unmarked) graves.

During 1997-8 old evergreen shrubs were removed and 18 trees purchased, along with a gift of 50 m of hornbeam hedging & 25 m of native hedging. During August 1998 Muntjac deer damaged the Amelanchier tree up to over 1metre so emergency protection was set up. More trees were to be planted as part of the 5 year project and they were encouraged to fill the roadside boundary with trees along the fence. ‘Plantings of Jan 30 and Feb 7 1998 are in place to include planting of the hedge (gap), the laying of the hedge at the far end of the burial ground and the planting of the commemorative trees’.

History of Peggy Patricia Johnson by her sister Wendy

Peggy was born in 1930 in Sowerby Bridge, West Yorkshire, the first born of William and Alice Johnson. She was very close to her grandmother (my mother’s mother,) who nurtured her in her love of nature. Grandmother took her out into the lovely countryside around her cottage, collecting dandelions, burdocks, herbs etc. which they made into drinks etc. She loved the sound of water streams, waterfalls etc. which had such an impact on her on these excursion.

My parents and grandparents loved the Classics: the Bronte’s Jane Austen etc. This is where her love of poetry and English literature came from. The family moved to Bradford for my father’s work and Peggy attended Belle Vue girl’s grammar school, becoming head girl. She then went onto Bristol University where she read English, Latin and Philosophy. She graduated in 1950 before going on to do teacher training.

Her next post was in Ghana where she lectured in English. It was there she met her fiancé James Stokes.

On return from Ghana, James was appointed Secretary at the Cambridge University Examinations Syndicate. They bought their cottage which was 1 & 2 Hope Cottages, in 1968 and set about renovating the cottages into one home. They found two wonderful Inglenook fireplaces and a bread oven.

A request from a school in Jaipur, India for a teacher for a year was sent to the syndicate. Peggy was appointed to the post which was at the Maharani Gara Davi girl’s boarding school in Jaipur. This was to help pay for the renovation of Hope Cottage. She loved the year in India.

On return, she was appointed Head of Bassingbourne Primary School. She had long been concerned about early learning and during her years at Basingbourne she developed a method of teaching children to read, called the Colour, Sound System.
She was made a Fellow of the Royal Society in 2012 for her work on Early Learning. She retired from Bassingbourne on her 60th birthday.

Sadly, soon after the renovation of Hope Cottage, James had a fall, banging his head. He made light of it but tragically died of a subdural haematoma (Dec 1984) – a shock from which Peggy never really recovered.

Peggy was on the Parish Council for many years and was a member of All Saints Parish Church. During her time on the Parish Council Peggy was instrumental in the planting of a large number of trees around the village, including the cemetery. The tulipa tree is one of those, which was planted outside the then Thai restaurant and is still preserved there now the restaurant has become a furniture shop.