No 1, The Old Bakehouse 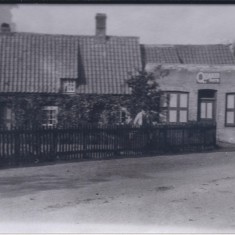 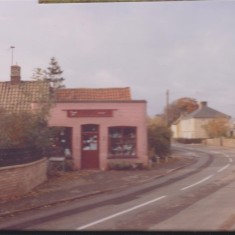 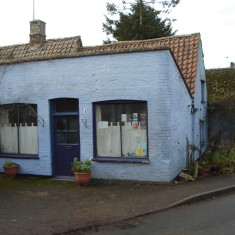 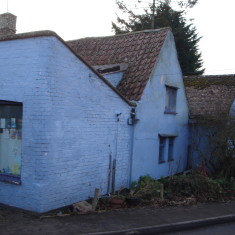 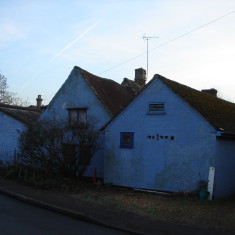 Listed as a Grade 2 building by English Heritage, The Old Bakehouse is described as a cottage of late 16th or early 17th century origin, much altered in 19th century.
It is timber framed and plaster, but the framing has been replaced with brick in parts. The steeply pitched roof, originally thatched, is now with buff pantiles and a small C19 gault brick ridge stack.
The fenestration is 19th or 20th century including a hung sash of four panes.

Auction, by Cockett & Nash at the Swan Inn on 22 Nov at 5 pm: Dwellinghouse with shop, bakehouse and outbuildings, orchard + 2 gardens at The Cross, Harston. By order of the proprietor, Mr Smith of Cambridge; immediate possession. Particulars etc: Cambridge & Royston.

In 1893 it was one of 16 property lots up for auction when the ‘Harston Estate’ of William Long was sold. It was described as a ‘Highly valuable freehold property comprising dwelling house and shop, containing 4 bedrooms, kitchen, sitting room, shop & storeroom & bakehouse with outbuildings, comprising boarded, lath & plaster & thatched shed, boarded & tiled piggery & W C with yard etc comprising 33 poles (more or less). The property is well situated for trade in a corner position at the junction of the Haslingfield & Royston Roads & is in the occupation of Mr Ashby, a yearly tenant, at £14 a year. The tenant claims the oven & certain fixtures’.  From 1861 to his death in 1905,  Josiah is recorded in Kelly’s directory as having the bakery and grocer’s shop in Church Street.

The 1910 land valuation (No 194 on map) has the house & shop/bakery owned & occupied by Andrew John Pearmain.

In Kelly’s Directory for 1929 Percy James Harrison is listed as a grocer & baker and in 1948 he built a new bakehouse beside the cottage but nearer to Church Street than the original bakehouse. Mr Covell who was bombed in WW2 came to Harston & worked for Harrisons. Jane Pevley remembers going there on Good Friday for hot-cross buns.

1964 Noel & Eileen Impey re-opened the shop. Son Peter lived there in 1960s when shop was very busy. Noel Impey’s J-M 1965 planning application for change of use from storeroom to butchers shop was refused due to lack of parking, on bend with restricted view, etc.

Roger & Pat Phillippo & family came to Harston in April ’76 and ran the shop for a year still as a general stores (Church Street stores). In 1977 Roger took over the shop as a craft shop selling pottery, general craft stuff and his glass. He then after some years just concentrated on selling glass to be engraved by him. Then in the early 2000s he closed the shop due to crippling business rates, and traded from a cabin in the yard. Roger ceased trading in 2013. The old ‘shop’ has now made a wonderful kitchen! .