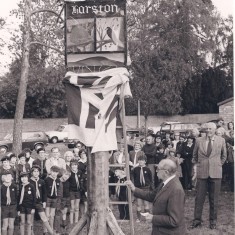 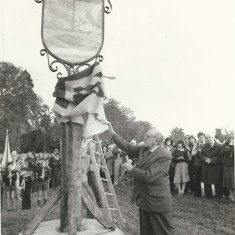 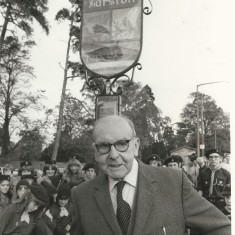 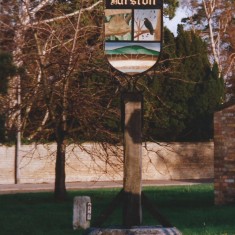 The sign commemorates the Silver Jubilee of Queen Elizabeth II. It was designed by Andrew Smith of Hitchin. The wooden post is oak, salvaged from a local 300 year-old building. by F G Willers & Sons, a long established village family business. They built the base and supplied the timber free of charge. The wrought iron work design was carried out by Victor Saunders of Cambridge Art Metals. The millstone, believed to be more than 500 years old, came from Hauxton Mill but was at Park House, Harston, for over 100 years.

The design shows a bee skep, a rook and artesian wells. The skep because Harston was known for honey production; the rook because there were, and still are, rookeries in the village; and the artesian wells because they supplied the village’s water supply until 1930s.

The sign was unveiled in October 1979 by Edward Barker, a 91 year-old resident in front of 300 people.