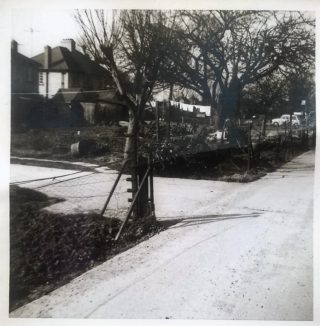 The Footpath, these were originally all semi detached Council Houses built after 1924 of solid wall construction with Burwell white bricks in lime mortar, a slate damp proof course and a slate roof. These were some of the last solid wall houses built in the UK, by 1930 most new builds would have been of the modern brick cavity wall construction.

Each house, as built, downstairs had a front room with fireplace, Kitchen/living room with cooker range, utility room with a copper boiler and a under stairs pantry. Upstairs had three bedrooms the two largest provided with small coal fireplaces, and an outside toilet. The windows were of dense pine wood and had small rectangular panes of glass. There was no electricity installed as built or gas (arrived 1980’s) or water which was originally fetched by hand from the well at the Green.

The picture shows the back of the houses in 1960 which by then had running water in the utility room and electricity. The side chimneys for a copper boiler in the kitchen and the outdoor toilet blocks were all removed by 1969 when the council added a new downstairs bathroom to each house and rewired.

Each house had a fruit tree in the back garden.