You are here: Home>Overview>Harston's beginnings 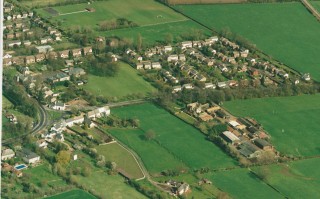 Harston lies some 3 km south of Cambridge in the valley of the river Rhee, by which it is bounded on the west. From north to south it extends for nearly 2 km, between the Rhee and the Hoffer brook on the south-west. It is bounded the parishes of Hauxton, Little Shelford, Newton, Foxton, Barrington and Haslingfield.

The soil lies on gault clay near the Rhee and chalk on the south-east; the bedrock is overlaid with alluvium beside the river and elsewhere with valley gravels. The land is mostly flat, rising very gently from under 15 metres by the river to over 20 metres in the south-east. It slopes sharply up to over 30 metres at St. Maggot’s Mount in the east, and over 45 metres at Rowley’s Hill to the south-east. The flat land by the river and drier chalk lands made it a good location for settlement, as did the bridging point across the river.

In earlier times, the main routeways ran east-west linking the important prehistoric Mare Way to the west with villages to the east. The crossing of the Rhee would have been in the vicinity of Harston mill and futher north at Burnt Mill bridge. Although no longer the main routeway, this east-west pattern continues today along the line of Haslingfield Road, Church Street and Station Road (formerly Baggot Road and before 1700, The Ridgeway). London Road which runs from the north of the village to Newton was part of the Cambridge to London coaching route in the 18th century. The village is now dominated by the north-south A10 Cambridge to Royston road. This was called The Portway from the 13-15th century and was part of the Dunsbridge turnpike road between 1793 and 1872.

Originally thought to have started as an Anglo-Saxon settlement, recent archaeological studies have provided a much earlier date going back to at least Bronze Age. A study by Cambridgeshire Council Archaeology Unit in 1993 at Manor Farm at the southern end of the village discovered Bronze Age ditches, cremations & artefacts.
A survey by Hertfordshire Archaeological Trust in 2000 in the area around Harston Mill prior to development of the site revealed occupation from the Stone Age onwards. Flint blades of Mesolithic and Neolithic date, a small Bronze Age ring ditch, early and middle Iron Age storage pits several containing human remains, postholes of roundhouses and other structures were found. There seems to have been little Roman activity but occupation seems to have resumed during the early or middle Saxon period. This area remained the heart of the village through the middle ages

Elsewhere there was a limited Roman presence as shown by some of the finds at Manor Farm, by spot finds throughout the village and by the discovery of 3rd century pottery kilns during construction work for the M11.