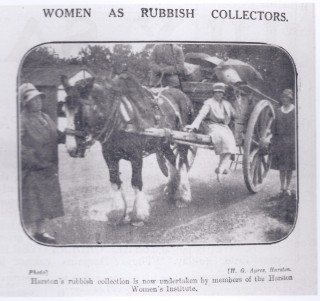 During the war years, WI meetings were held in the Oddfellows Hall in Green Man Lane because the military were using the village hall where they usually met.

Throughout the war years, Harston W.I. spent time raising money for various causes which included the ambulance fund, nursing association, searchlight fund, Anchor Day, merchant seaman, prisoners of war, parcels to friendless soldiers and sailors. They also collected stamps, eggs and flowers for Addenbrookes Hospital. They helped to set up a National Savings group at this time but it was slow to get off the ground.

Members helped the war effort by mending uniforms for the troops, mending socks for new village people so they had some comfort,  and collecting toys for under 5 year olds who were coming from Whitechapel to stay in Shudy Camps. They organised a party for evacuees, and campaigned for more clothing coupons for expectant mothers and to receive them earlier. They also knitted balaclavas and gave rabbit skins to use inside coats for the Russians.

Once they had to get permission from the Ministry of Information so a talk on Russia at a WI meeting could go ahead.

In 1944, W.I. and the Home Guard organised a dance and a concert party in the village hall for ‘Harston Forces Homecoming’. At a meeting in May 1944, feeling was voiced ‘expressing thanks to God for our deliverance from the scrounger of Europe’.