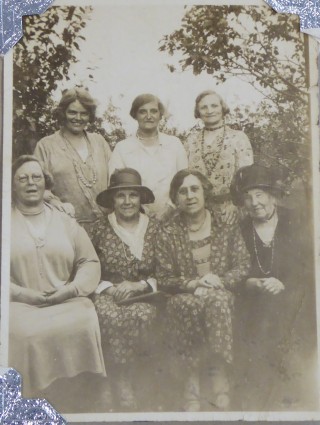 Harston’s inaugural meeting was held on February 16th 1920 in the Council school. The room was filled to capacity! From the women attending, a committee was formed with Mrs Young elected as president. Other members of the first committee included Mrs. Rowley, Mrs. Schofield, Mrs. Clarke and Mrs. Smith. It was agreed that the age of admission was to be 15 years.

The first WI meeting was held on March 3rd 1920 in the chapel schoolroom. Various rules were introduced – only people living in Harston could attend, the WI must be non-party and preserve a strictly neutral attitude, and a library was introduced with a charge of 1d.

The first meeting included a discussion ‘Women and the vote’, exhibition of war trophies, game of charades and refreshments. Very topical! The W.I. committee arranged a wide variety of programmes for their subsequent meetings which included Furnishing a cottage, infectious diseases of children, flies and how to get rid of them, League of Nations, Lantern lecture and demonstration, local government, care of children’s teeth, legal position of women, history of Harston (Helen Greene) and, interestingly’ Cover the Alps in a motor car’! Competitions included – best cake (costing no more than 2/-), home made xmas present, washing and ironing, and more challenging, apple and potato peeling!!

In July 1920, a fund towards a village hall was started along with other organisations and contributors in the village.

An article in the Cambridge Chronicle on 29 Sep 1920 stated that ‘Weaving Cottage (owned by Helen Greene) has an iron building in the garden, where certain educational work will be held in connection with the Women’s Institute. Here, too, take place rehearsals for the Harston Dramatic Society, whose work at present is to organise entertainments in aid of a village hall, where further useful work can be carried on. The County Education Committee have kindly allowed the school to be used for the Institute meetings, but the members are so numerous that it is now too small, and every effort must be made, and all help will be welcomed, to get a suitable meeting hall to house the growing energies of Harston’.

Late December 1920 (Cambridge Independent Press) Harston Nativity Play, ‘The Shepherds of Bethlehem’, was produced at Harston House in The Old Weaving Room by kind permission of Sir Graham Greene. The movement towards this profitable and agreeable pastime of play-acting was started in the village by the Harston Women’s Institute to help in the provision of funds for the building of the village hall.

In 1925 the WI made a resolution to support ‘the new idea of rural colleges for education, including agriculture, and for social welfare’; the forerunner of our present day village college system.