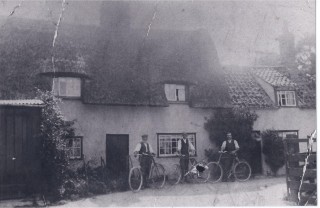 The house seems to have been built by the Hatley family who were blacksmiths, and may have been constructed by the Henry Hatley who died in 1653. After his death the house belonged to his widow, Mary, who lived here, probably initially with at least 7 children, until her death. The house seems then to have gone to her eldest son William Hatley (see manor court record 1700/01). There is no record of his ever having married and he probably died without any direct heirs. On his death, the
house passed to his nephew Henry Hatley, who was the eldest son of Stephen,  William’s younger brother. Henry died in 1720 and left the house to the use of his widow Mary and eldest son Henry.

William Hardwick died at the age of 26 and the house then passed to his son William who was then a child of 5. Because he was so young, the property was looked after on his behalf by his grandfather John Hardwick until he was 21. Grandfather John died in 1794, and the property was then taken care of by John’s son  James (William’s uncle) who lived in Barrington. He was named during the Enclosure process in 1799 as holder of the house and lands belonging to it. William Hardwick did not live to be 21 and was dead by 1805 and uncle James inherited the house and as legitimate owner then sold it to Jacob Wisbey, a small farmer and higgler (see manor court records 1805/6). When Jacob died around 1850, the property was left to his second son William who was dead by 1881, when his
son David lived there with his two daughters and mother.

Little is known of what happened to the property in the late 19th and early 20th centuries. In 1937, the house was still inhabited by a Wisbey when it was called Fountain Farm and still being used as a
farmhouse. By the 1960’s the house was being lived in by the Scudamore family, reputedly an old lady and her son. By the mid-1980’s the Scudamores had moved out and the house was uninhabited for some time until the whole property was sold to CALA Homes, a property development agency who detached the rear section of the garden from the site to build a new house. After this,the old house was sold to Liam Harris who took over the property after about 3 years of being uninhabited and he instituted building works to make the house habitable once more.

In 1998 Fountain Cottage was purchased by Heather Birch and Michael Sekulla who did further restoration and had the trees which had been planted around 1955 and surrounded much of the property cut down.