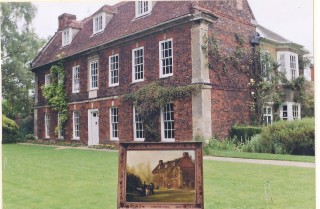 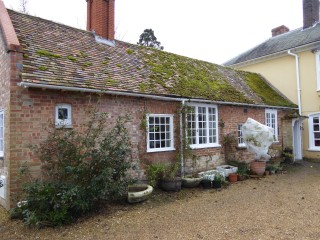 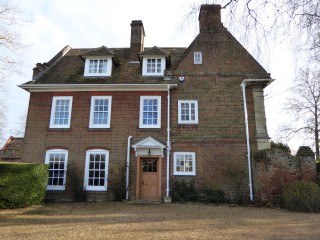 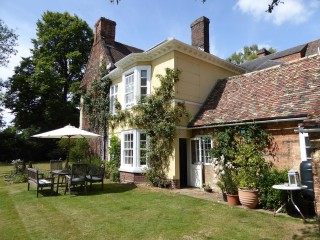 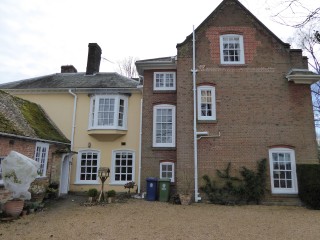 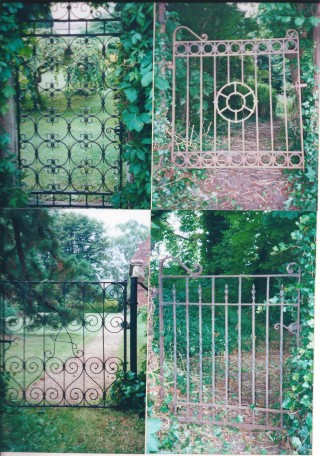 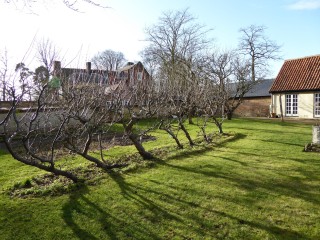 Early C18th Harston House is set back from the road within its walled enclosure facing Church Street and The Green, although its address is 38 Royston Road. Both the House and part of the Wall is a grade II listed building. Adjoining the front of the house is the short length of red brick garden wall, including two piers to a garden gateway, with stepped brick finials, all built about 1710.

At inclosure in 1802 Harston House was called New House but was probably built about 1710 as the Hurrell’s new residence north of the western Green, with a substantial estate surrounding it. Old deeds, however, say the house was known as Thoroughfare Inn in the past. Roman tiles found in grounds, old beams found dated about 1480 and an original C16th Tudor fireplace with chimney discovered in the drawing room suggest there were earlier buildings on the site, parts of which have been incorporated within the present building.

The principal part of the house (facing The Green) belongs to the periods of William & Mary and Queen Anne (1688-1714). An example is found also in the panelling in the main dining room. The two storey house is red-brick with clunch detail below the edge (moulded eaves cornice) of the steeply pitched plain tiled roof. Three hipped dormers are in the roof lighting the attic.

The façade is flanked by clasping pilasters in two stages with a moulded band between the storeys. The clunch pilasters at one corner of the house are where various members of the Greene family have carved their initials on the soft chalk.

Each of the window arches has a raised keyblock, also of clunch, gauged brick arches and rusticated surround, but the centre window over the doorway has a pulvinated (pillowed) frieze. The doorway and one window at ground floor have similar gauged brick arches and clunch keyblock but the soffit of the arches has fine cut brick work. There is a range of seven windows with flush frame hung sashes in open boxing, with later hung sashes of twelve panes each.

Adjoining at the rear is a one storey service wing about 1710 of mainly red brick with staggered, butt purlin, tiled roof.

Alterations to the original

When Sir William Graham Greene bought Harston House in 1893 it was outdated and damp and he made many improvements, alterations and extensions particularly to the East & west sides and rear. Many alterations and additions around 1912 were by T.D. Atkinson, F.R.I.B.A. of Cambridge.

The rear wing, parallel to the front range either incorporates part of the c.1710 rear wing or was completely rebuilt c.1912. The rendered wall is on c.1912 brick plinth with a low pitch, hipped roof of slate with wood modillion eaves cornice. There is a large red brick stack with c.1710 brick work. It is two storeys with two storey canted bay to one end and two cross fame casements, possibly reset. The rest of the fenestration in this part of the house is c.1912 hung sashes with narrow glazing bars, except for two hung sashes in a rear wall which have thicker, ovolo moulded glazing bars of the early C18.

Interior: From the front entrance two rooms flank the narrow entry bay which has the original closed string staircase with turned balusters and square newels. One room is lined with panelling in two heights. A former service corridor between the front range and rear wing has been incorporated in this room and the panelling has been reset.

Sir Graham Greene was uncle of the author, Graham Greene who as a child used to spend his holidays there, and later based locations in his books on Harston House.

In the garden on its front lawn facing the Green is a beautiful Art Nouveau fountain dated 1897 with Greene initials on it. this is fed by an artesian spring. Mary Greene was said to have ‘brought the garden to perfection’ with help of Ernest Northrop, her gardener. She designed the wrought iron gates made by Harry Lawrance that can be found in the grounds. There is a sundial within rose gardens around which the lawns are shaded by a tall Gingko tree. At the edge of the lawns is a small stream, beyond which is woodland, and the site of an old tennis court enclosed by tall trees.

Some foundations remain of a large brick dovecote which stood at end of the garden which previous owner, Mr Long, pulled down. This dovecote had been large enough to seat 50 men when the Horkey feasts were held there.

Early ordnance survey maps of 1885 and 1903 show the house with walled enclosures to the rear, an orchard beyond and an oval, shaded pool to north-west. The latter has disappeared.