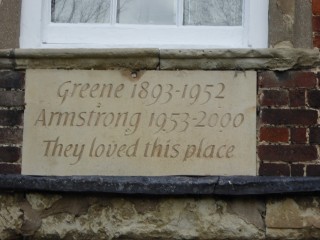 It is thought that the Hurrell family built the ‘New House’, as Harston House was then named, around 1700 and had quite a large estate. Five generations of the Hurrell family lived in Harston from the early 1630s – their graves are found in the Parish churchyard. Each son was named Allen. The last generation to live in Harston House was Allen Hurrell married to Margaret Wale (of Little Shelford). Margaret died in 1762 when the house passed to her daughter Margaret who had married John Bridge.

On the death of John Bridge the House was passed on to his son Thomas Bridge Littell who is shown owning much land on the 1799 Inclosure Map. His daughter Henrietta Bridge married William Long and they succeeded to the land and House around 1832.

In addition to William Long farming the land he is thought to have had built the Pemberton Arms and the Three Horseshoes. He died in 1883 and his wife in 1892 when the whole estate was sold off- see Sale of Harston Estate display info. This resulted in the estate being broken up and businesses sold off.

Sir William Graham Greene (the Permanent Secretary of the Admiralty and a Knight of the Bath) bought Harston House for his widowed mother Charlotte and sisters to live in with him. The house was outdated and damp and he made many improvements, alterations and extensions particularly to the East side and rear. He rented out the farmyard to the rear and part of the land and building, opposite the War Memorial, was rented to James Lawrance – the blacksmith. Lawrance made a number of wrought iron gates for the gardens of Harston House. Mr Stocker bought the Cottage (no 1 High St – once two cottages), the smithy building and its garden from Mr Greene around 1940. The smithy building was renovated and now sells second hand cars.

She only had the House and surrounding paddocks for a year and sold off it off in two parcels.

Iris & Terence Armstrong bought the House but did not want all the paddocks which were sold to Mr P K Stocker. See 2015 plan of Harston House and Surrounds.

Charlotte and Francis Clarke have restored some of the original features, including the fountain on the front lawn which once again flows naturally from artesian sources. The Armstrongs had made a flowerbed where this was.