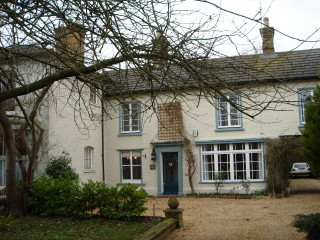 During the C19th century and until the 1920s there were several harness makers within the village. The 1851 census shows Christopher Wedd and his nephew Joseph Wedd as saddlers and harness makers. Christopher was in Kelly’s directory until 1888, he died in 1889, and Joseph was recorded until 1923. They had a saddlers shop and business premises in what is still called Saddlers Cottage at 44 Royston Road, facing onto the Green and traffic passsing through Harston. The large window still there was the shop window and a displays of saddles and harnesses could be seen through it. Joseph’s sons also were trained in the business, as was Dillety’s son next door in the Queen’s Head and other apprentices.  Joseph Wedd sold the saddlers shop and premises in 1920. Mr Dilley (of Queens Head) was the last harness maker in Harston. According to Helen Greenes book (1937) ‘before Mr Dilley – Mr Wisbey was a harness and shoe maker who lived at Camping Close and who had four apprentices working for him’. Mr Wisbey’s 4 apprentices were his sons.