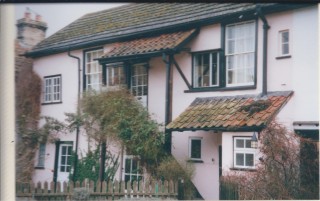 An article in the Cambridge Chronicle on the 29 Sept 1920 stated: “It was in 1916 when Miss Greene started the Weaving House in Harston by fitting up, in a picturesque loft, warping machines, looms, etc. Since then spinning and weaving has been carried on here. It is hoped that this and other industries started will flourish during the coming winter. Miss Newman is at the head of the Weaving House, Mrs Hamblin Smith is in charge of the spinning industry and the tapestry, and Miss Greene controls the dyeing and wool coverlet weaving. The designing is carried on in the studio, an iron building in the garden, of the Weaving House, in 2015 called Weaving Cottage.

During the war the work was done under difficulties owing to the lack of threads and dyestuffs. Then friends of the Weaving House could be met on the roads almost buried under their loads of wild weld (roseda luteola) from the chalk pits, or with heavy baskets of privet berries or walnut husks. Hampers of lichen would arrive from the west or boxes of sweet gale from the northern moors. The tall weld plants, often 6 feet high, would be hung up and dried for future use, and the lichen left to dry in the hampers, the walnuts would be put in basins to soak and turn black, but the berries must be used without delay, for if once the skin dries no pretty blue colour can be drawn from the little black beads. Now indigo takes the place of privet berries for blue, but weld, walnut, lichen and sweet gale still hold their place. They are put into big pots as wanted, sticks are gathered, the fire is soon alight in the out-of-door stove. The freshly-washed creamy wool threads are lowered into the ’ooze’ and soft coloured hanks are hung up in the air to dry.

Miss Greene passed through some troubles during the war when hunting for wild plants that might be useful to her. One plant she found dyed paper and her hands a strong unpleasant khaki (so powerful that her hands had to be covered for a week), but had no effect at all on the wool. Rhamnus Frangula, the buckthorn of our hedges, had to be put aside as of no use except for leather dyeing, Various barks were tried, and nearly all were successful, including chestnut, alder, wild crab and birch.”