You are here: Home>Topics>Education>Meetings in 1896-7 of the School Board 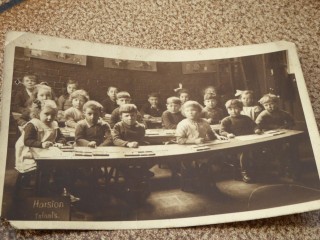 Meetings in 1896-7 of the School Board who managed the school seemed to focus on appointment of and payment of teachers at varying levels (assistant teacher, teacher, pupil teacher) and the maintenance of the school and master’s house. In 1897 it was agreed the ditch adjoining Mr Lawrance’s property at the end of the sheds belonging to the Board would be thrown open and a drain laid from there to the cesspool in Mr Lawrances garden. The galleries or rows of tables where the children learnt had to be repaired and altered. The clerk had to contact parents whose child wasn’t attending school regularly.

As regards education there was a focus on needlework for the girls and in October 1896 it was agreed that children be allowed to exhibit needlework at flower shows, and their efforts were sold off to the public to bring in money for the school or schoolmasters. It was further decided a Needlework and Domestic Economy (Continuation) Class was to be held at the school on Monday and Wednesday evenings to be taught by Mrs Beaumont, for remuneration. (They were allocated an oil allowance – presumably for lighting and coal was regularly purchased, presumably for heating.) In comparison Mr Beaumont was authorised to buy a map of the colonies, having previously bought ones of the British Isles and Europe. In June 1897 a Summary of an Inspector’s Report said:
“An excellent beginning has been made here. The school has been greatly appreciated and very good work has been done especially in needlework which deserves special praise.”