You are here: Home>Topics>Education>School memories in 1930s & 40s 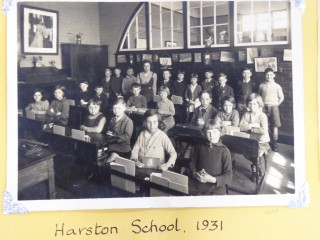 Kath Rayner went to Harston school around 1931, going home to Hauxton for lunch either on her uncle’s bicycle or later on by bus. She only stayed at school for lunch, eating her sandwiches, if the weather was bad.

In winter the girls did cookery, while the boys did woodwork; in summer the girls did washing and the boys would put poles into holes in the playground and erect a washing line. Kath recalls taking a bath container to the pump and trough on the Memorial Green, near the school, to collect water to do the washing. The boys would play football and cricket on the Park or work on a patch of allotment in what is now Orchard Close.

Joyce Carter went to school in Newton till 11 then along with all others came to Harston for the last 4 years (1938-41). She recalls in the old Harston school there was a hall at the front by High St and two classrooms behind. Next to the hall was a room where the boys did woodwork and the girls in turn did cookery, or learnt how to do the laundry. These subjects were taught by peripatetic teachers – Mr Chadwick came to teach the boys. Mrs Richards was a teacher there who taught everything, including needlework to the girls. The bigger classroom was for ‘Daddy’ Royston and had double doors for him to exit opposite his house next door.

Helene Greene presented Joyce with a prize for a poster depicting the Battle of Britain week.

Val Joslin attended Harston school as an evacuee in WWII and remembers there were a lot of evacuees but they integrated well. She recalls the small bottles of milk and concentrated orange juice they were given. Mary Greene and her cousin Graham Greene set painting competitions in school which she won.

The Ives brothers were both educated at Harston Village School. They remember a bustling school with around around 20 pupils in a class. Miss Greene of Harston House used to come and help Mrs Richards and ‘Daddy’ Royston run the school. They remember ‘Daddy’ Royston as a very kind man, but a strict disciplinarian who was unafraid to use his cane on misbehaving children. John remembers being caned on his first day because he didn’t want to go to school!

Brian Willers went to school at Harston till he was 15. After school Brian and his brothers used to go round to the Lawrance smithy on the High St near the school and pump the bellows to create the sparks. Brian says he seemed to get the cane daily for one reason or another. When Royston’s wife used to bring him cake he would often fall asleep and the schoolboys would eat his cake and he didn’t seem to realise. After George Royston, Peter Shoot took over and Brian only got the cane twice in the last 4 years!

Gordon went to school in Newton until 1945 when he went to Harston for his senior years. He stayed at Harston school till he was 15 as the school leaving age had been raised from 14. ‘Daddy’ (George ) Royston was the head master, ready for retirement but kept on after the war for a while due to staff shortages. Gordon felt he was taught and learned little at that stage as Royston would get them to repeatedly read around the class- ‘Tales from the Homeland’ and ‘The Golden Fleece’. Royston would appear to fall asleep at times. He had French windows opposite the school house so he could easily get home. He would get some of the boys to work on his garden, or harvest the walnuts from his tree to prevent anyone else taking them. Another time he got boys to put up his washing line.

There was no school kitchen then so meals would be delivered to the school in sealed tins – Gordon didn’t know where from. Sometimes Royston would open up a tin and remove some of the meat to eat before handing it to a pupil. Apart from the Victorian buildings there was the boiler house between the Big Room and Royston’s classroom and the other buildings in the playground were toilet s- one end for boys, other for girls, with a wall behind. Gordon recalls there were no playing fields then as they were covered in glasshouses. The playing fields were added after The Paddock was developed in 1969/70.

Apart from Mr Royston, there was Miss Jackson who took the infant class and Mrs Barnes who took the Seniors – 11-14 yr olds. Later on, before Royston left, Mrs Barnes’ classroom was divided into two and another classroom created between hers and Mr Royston’s and another teacher was employed. The Big room was used for woodwork and cookery. Mr Norman would come once a week to take the boys for woodwork. Once they built a wheelbarrow but it was too big to get it out through the doors.

They didn’t have any proper physical education in those days – someone sometimes took them for football or cricket in The Park (Hurrell’s land). One Monday Mr Royston turned up and told the boys they were to have a football match against Haslingfield where Mr Coles was the Headmaster. Harston had no team so the boys were chosen with no preparation but did their best – the result being 11-0 to Haslingfield. If you could swim, you were taken occasionally to Royston to The Green Plunge but as Gordon couldn’t swim he was never allowed to go. The parents raised the money to build a school swimming pool which must have been before 1971 as it was shown on that map.