Growth of the railway system 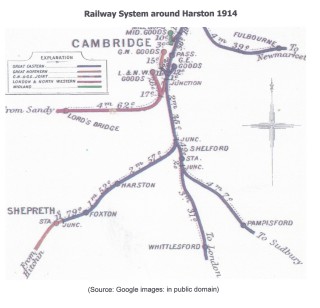 There was much competition between railway companies. The Great Eastern built a line from London (Liverpool St) to Cambridge and the Great Northern wanted to run a line from London (near King’s Cross) to Cambridge, branching off from Hitchin. They got an Act of Parliament to give them permission in 1848 and they already had the lease on the Hitchin to Royston 13 mile section (built 21 Oct 1850), but couldn’t get as far as Cambridge.

From Shepreth, Gt Northern arranged for 4 horse drawn omnibuses, five daily, to take passengers to Trinity St Cambridge, covering the distance of 9 miles in 40 minutes. In spite of changing trains at Hitchin and getting on the omnibus the GNR service was only 15 minutes longer than the Gt Eastern service from Bishopsgate ( nr Liverpool St, London). Gt Northern also undercut Gt Eastern’s prices. A Third Class through fare was 5/-.

The two parties, the ECR and GNR were not on the best of terms, but on 1 April 1852 common sense prevailed and an end on junction was laid and Gt Eastern took over the lease of the line to Hitchin. Gt Eastern only ran local services. These went through Harston providing much better services for Harston as shown by the newspaper adverts below, although the track remained a single line.

Train timetables advertised in the papers

The only way that Great Northern, therefore, could get trains into Cambridge from Kings Cross was to obtain running powers from the Great Eastern Railway by threatening to build their own new line to Cambridge using part of the Cambridge to Bedford line. This worked and in April 1866 Gt Northern took over the lease of the line and ran services straight through from King’s Cross to Cambridge, changing the single line track to double (which Gt Eastern had previously agreed to do!).