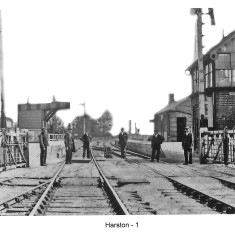 Station staff with main station to the right
TG 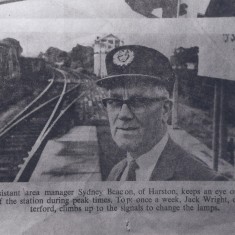 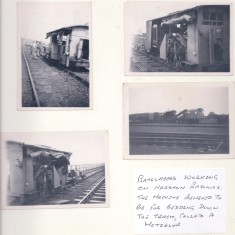 There was a staff of stationmaster, clerk, two signalmen, two porters, a shunter with his horse and a gang of platelayers.
Just to show how complex the railway system was in those days, the station master, station clerk and porters were employed by the Great Eastern Railway; the signalmen and platelayers were employed by the Great Northern Railway. This situation occurred when the railways were being built.
Laxton William Barton was the first stationmaster ( Great Uncle of Mr G.T. Willers). Kelly’s directory gives station masters as Frederick William Hance 1875, Lewis Frederick Fosdike 1879, William Herbert 1883 then Joseph Seaman in 1888 & 1892. Thomas James Seaman was then station master for 40 years. The last one was Mr Clutten until the station closed in 1963.

Harold Northrop was the station clerk in 1917 at age of 13. His father was a porter.

Harry Bass (ancestor of Ron Bass) was the first signalman. His signal box was the little shed on the west side of the level crossing, later used to house the railwaymen’s tools. Charles Cook and Ted Handcock were signalmen after WW2 and Sidney Deacon (who moved to Harston in 1938) was signalman and later, relief Station master.

Dennis Chapman worked on the railways and offered Bert Rayner a job. Bert’s job on the railways, working from Harston Station was to maintain the track by adding ballast, removing weeds and checking the rails every day to ensure they weren’t cracked by tapping them. He would check them all the way to the Shelford junction on one day, then another would walk along the line towards Melbourn. When Harston was closed he worked from Foxton but could be sent wherever he was needed.

The father of Miss White of Stag Villas (Church St) was one of the men who laid the railway. The 1851 census showed quite a number of railwaymen lodging in the village, the largest (7) being with Mr Willers’ family in Button End, presumably in the Fleece. 1 lodged in Church St, 2 in the High St and 1 at Old English Gentleman.