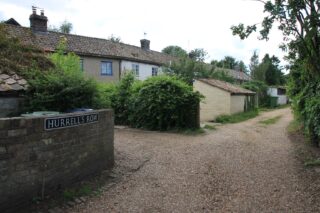 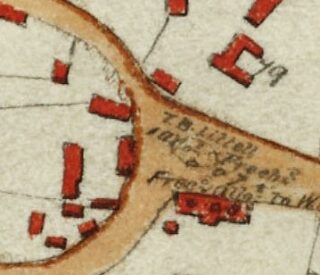 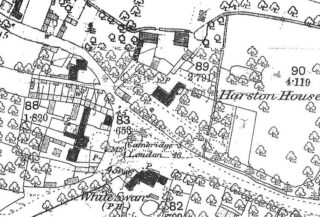 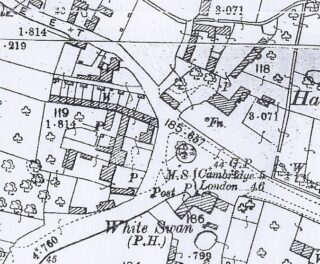 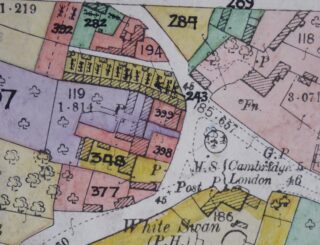 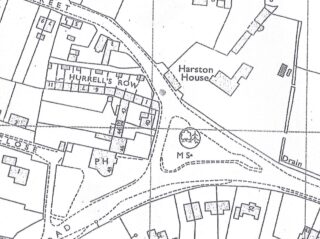 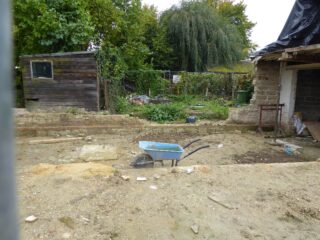 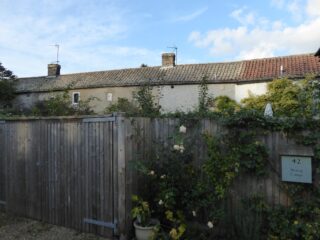 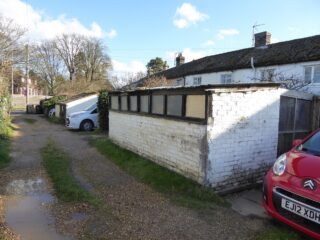 Where did the name come from?

We assume it got its name from large landowners – the Hurrells, that used to live in Harston House (No 79 on the 1799 Inclosure map) opposite Hurrell’s Row.  However, the last named Hurrell to live there died in 1770s. Later, part of the Hurrell family built and moved from Newton into Park House, High St, Harston in 1854 so would still have needed labourers’ cottages for their workers and the newspaper advert below reveals they were probably bought in Jan 1861 by the Hurrell’s.

1860 December: Auction by Mann & Son on 4 Jan 1861 at the White Swan, the following desirable properties:

Lot 1, 12 cottages or tenements with blacksmith’s shop. Outbuildings and gardens in the several occupations of Joseph Webb/Wedd and others, at rents amounting to £37 per annum, in the centre of the village. Freehold, no land tax.

When was Hurrell’s Row built?

At least the first part of Hurrell’s Row appeared to be there when the Inclosure map was drawn up in 1799 but it was probably later extended into a longer terrace, possibly where there is the bend – between Nos 4 and 5 as shown in the photo. The older part is shown to the left of the ‘T’ in T B Littell on the 1799 Inclosure map.

The 1861 census only lists 5 families, all born in Harston, as living in Hurrell’s Row so maybe only the first 5 cottages existed or were occupied as late as 1861. These families were:

The 1860 advert referred to a blacksmiths shop attached or next to the 12 cottages. The village blacksmiths were Hatleys who owned the land Hurrell’s Row was built on and the houses to the south. George Hatley lived in a house next to Hurrell’s Row until about 1853 when the Hatleys left the village. Prior to it being named Hurrell’s Row it may well have been called Hatley’s Cottages as a newspaper advert of 1835 refers to a sale of the land to the west of the cottages: Paddock to let, 1 acre 2 roods 26 perches and orchard 2 roods, (probably plot 37) behind Mr Hatley’s cottages. The 5 cottages could possibly be the first part of Hurrell’s Row.

The 1860 advert refers to the buildings being in the occupation of Joseph Wedd and others. It would appear that Christopher Wedd, a saddler and Joseph’s uncle, had moved to the village and bought all the properties facing the west side of The Green and cottages around 1849 around the time the Hatleys were leaving the village. We know from adverts that he then improved and extended the two large houses (Nos 40 and 46 Royston Rd) in the late 1860s and may well have extended the cottages prior to this around 1860.

There were eventually twelve two-up, two-down labourers’ cottages with outhouses plus blacksmiths buildings, and a washhouse at the eastern end although the 1885 map divides the row into 14 sections. The washouse accounts for one which, it is understood, was also used by the coprolite diggers returning from the Button End diggings.There was a tinker’s yard at one end.  The outhouses contained an outside toilet and coalhouse originally but modern improvements have created indoor bathrooms but reduced the sleeping space upstairs. They have narrow spiral staircases and originally had sliding windows- No 4 possibly the only one retaining these. The 1881 OS map shows the row between 88 and 83 and W (well) indicates where there was a watertap half way along the row.

In 1937 Helen Greene in her History of Harston book described Hurrell’s Row as 12 mean cottages built of clunch. Brian Willers, local builder, however said they were made of claybat.  Both were correct, as the collapse of No 9 Hurrell’s Row during building work in 2015 revealed that the foundations/footings were of clunch, then 2-3 feet of brick for the lower half of walls, then claybat walls above – see photo. As Claybat blocks were made in large wooden moulds from broken up clay, mixed with water, dung, straw with horse hair to seal it, this produced an unfired clay block easily eroded if exposed to the elements. Once supporting walls and windows have been taken out and with a heavy tile roof, exposed walls can collapse if not protected from the elements.

There were tiny or no back gardens with a boundary wall next to No 40 Royston Rd, Melbourne House, which is side on to Hurrell’s Row as is Weaving Cottage. You can see the back of Hurrell’s Row from behind Saddlers and Weaving cottage.

Harold Northrop was born on May 7th 1903 and was the oldest of 8 children, 3 boys and 5 girls.  In his memories he said: We lived in a house in Hurrells Row, two bedrooms and a living room, one of a row of 12 such houses. Several of the other houses’ occupants also had large families such as ours. Living conditions were very poor. Our parents slept in one room and the other was separated by a curtain which separated the boys from the girls. On very cold winter nights the beds were warmed by hot bricks, the bricks being put in the oven for heating.

All cooking had to be done on an open coal fireplace, mostly in a boiler. Mother was a good cook. She had been well trained as a cook in service before marriage and could make good substantial meals out of almost anything she could get hold of. Making sure we were always well fed was her first priority and considering all 8 of us are at the present time old age pensioners, is a tribute to her way of bringing us up under the worst possible conditions compared with today’s life style.

Toilet facilities were non-existent, only the jerry pot under the bed, and the outside lav was a pail under a wooden seat. (The original toilet/coal shed blocks can still be seen in the photo.) This was emptied in a pit dug in the garden where all household rubbish was also thrown. This was cleared out several times during the year and taken to the allotment in a hand cart. Flies were always in abundance and sticky fly papers decorated the house. Sanitary conditions, as stated, were very bad and this could have been the cause of a scarlet fever epidemic about the year 1911 in the village. Several children were affected and it was a common sight to see a horse drawn black carriage taking the patients to the isolation hospital at Oakington. My eldest sister was a victim of the illness. Our bedroom was sealed off and fumigated and my father had to go and sleep at my grandmothers for a time.

Our water was obtained from natural springs which ran freely day and night in fountains throughout the village. This we had to fetch in pails for all our requirements.

During the C19th these cottages were rented out and often housed very large young families but during the C20th they became more suitable for smaller households once they were sold and modernised.

The whole of Hurrell’s Row was owned by Arthur Hurrell of Park House until its sale in April 1910. He sold to William George Jude of Quarry Farm, Haslingfield the 12 freehold cottages, outbuildings and blacksmiths building using Stag Villas and a parcel (2 acres of freehold land) as collateral. The 1910 Land valuation map doesn’t record a blacksmiths so it may just have been old blacksmiths buildings.

Jude continued to rent the cottages out until 1933 June 27 when he sold the 12 freehold cottages with outbuildings (one of which was formerly a blacksmiths shop) for £655 to (James) Harry Albert Nash of 50 Chesterton Rd, Cambridge.

In 1954 Harry Nash sold Nos 6 & 7 to Ernest Claude Willers and these were combined to make No 6 (although much later split back into No 6 & 6A). Ernest Willers was Brian Willers’ uncle and also Fred Willers’ brother – both local carpenters. Ernie had a workshop in the two outbuildings. In 1955 Harry Nash sold the remaining 10 cottages to Mrs M A Lawless for £650.