You are here: Home>Topics>Industries>Clunch & lime 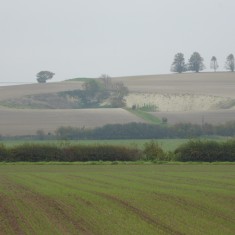 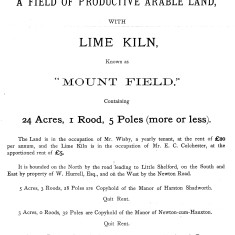 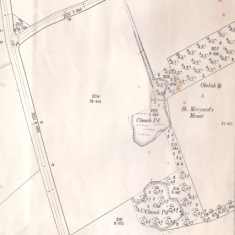 Clunch is a hardened chalk, a band of white cretaceous limestone found in the Lower Chalk  In medieval times it was widely used as a building material  despite its porosity and susceptibility to weathering, because of its ready availability and the absence of local sources of stronger building stone. This continued to be the case until the late nineteenth century and the wider adoption of clay bricks using the local Gault clay, with its distinctive yellow-grey colour.

There were three clunch pits in Harston. The most obvious can clearly be seen on Rowley’s Hill from the A10. This appears to have been disused from at least the 1880s. The other two pits are less visible and are on the south side of Maggot’s Mount. One appears to have been disused by 1885 but the other one which is nearer to Shelford Road was in operation together with its lime kiln in 1893 when it was auctioned off as part of the sale of William Long’s ‘Harston estate’.

Helen Greene recounts the story of a man and boy who were burning lime at Maggot’s Mount when they both fell into the pit. A little boy who who was on his way to order some clunch blocks ran to get help but by the time the village constable and Mr Willers arrived, all they could do was to pull out the bodies.