You are here: Home>Topics>Industries>Wind milling 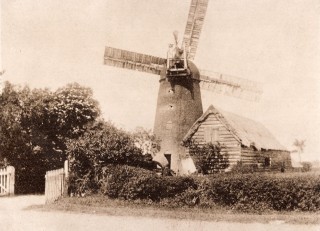 There appears to have been two windmills in Harston. Neither are shown on the 1799 Inclosure map. One is believed to have been sited near the junction of London Road & High Street. The only record found so far is of its destruction. A report in the Suffolk Chronicle of 7 September 1833 states ‘On Saturday last, a mill at Harston, Cambridgeshire, was burnt down. It had not been worked during the last 12 months but the violent wind of Saturday breaking away the fastenings set it going at so rapid a pace that the friction of the machinery caused the mill to fire.’

Part of the tower of the other windmill stands on Newton Road and full details can be found here -opens in new window.