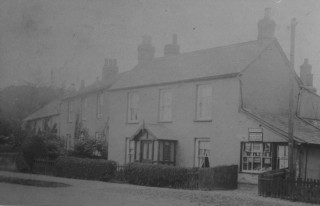 William Gwilliams was Postmaster in 1858, recorded in the1861 census as in the High St, Harston. He came from London. By 1881 he had become a farmer of 20 acres in Cantelupe Rd, Haslingfield.

His son Thomas Gwilliams was the Sub-Postmaster in Station Road from about 1873. He had no children from his first marriage to Marian so when he remarried in 1909 to Joyce Gouldthorp, his widowed sister-in-law Georgina Ilsley lived with them as did his new nephew Cecil Maurice James Ilsley. The latter became his assistant and later on the Postmaster after Thomas died in June 1933.

Joyce Carter worked from age 14 at the Post Office, in Royston Rd from 1941-43 for the Ilsleys. She did the counters and delivered the telegrams on her bike. The Post Office was owned by Mrs Ilsley, a Baptist.

It was also the (national) Employment Agency. One winter, when the watercress beds froze over, ladies from Fowlmere cycled to Harston to sign on for the dole (unemployment benefit.) All the pensioners were paid on a Thursday.

Miss Kathy (Kathleen) Hurrell used to buy a lot of National Savings Stamps from the Post Office then sell 6d stamps to people who would stick them in a book and when they got 15 shillings’ worth they could get a National Savings Certificate.