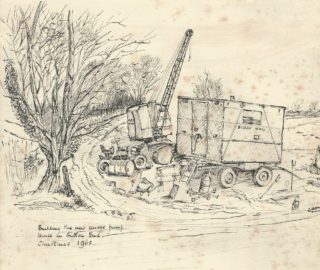 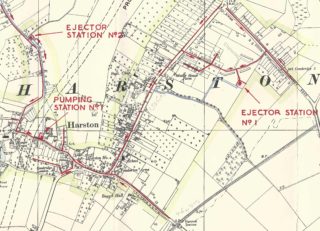 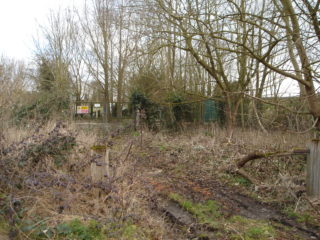 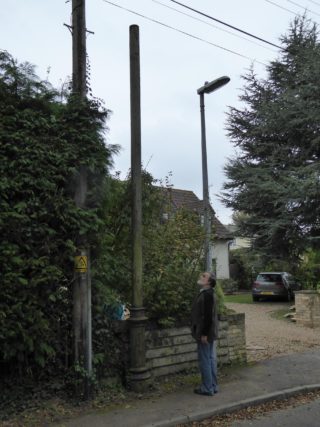 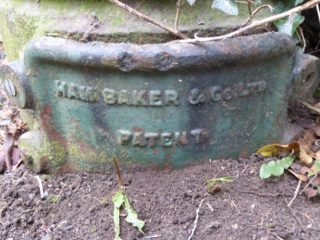 Harston’s sewage system has just celebrated its 50th birthday! Many residents remember a time when sewage disposal (or nightsoil as it is often quaintly called) was more of an issue. Before drains or septic tanks, a hole in the ground seemed to be the universal method.

Harold Northrop’s memories of his time in Hurrell’s Row recount that “Toilet facilities were non-existent, only the jerry pot under the bed, and the outside lav was a pail under a wooden seat. This was emptied in a pit dug in the garden where all household rubbish was also thrown. This was cleared out several times during the year and taken to the allotment in a hand cart. Flies were always in abundance and sticky fly papers decorated the house”. The buildings that still stand at the end of front gardens of many of the Hurrell’s Row houses were the “outside lavs” to which Harold refers.

The Northrops use of sewage for growing fruit and veg has been mentioned by others. Louisa Cullingford lived in Mill Cottage at the junction of Mill Road and Royston Road and her granddaughter Shirley remembers that “She had one of the best gardens in the village. She used her nightsoil – no sewerage or septic tanks then! You would walk out of the front door and around the cottage to use the smelly old loo at the back”.

Gerald Ives recalls his time in Green Man Lane where there was “No drain to take the sewage away so they dug holes in the garden and buried the waste. This was one of the reasons we had a big garden (75 yards long), as well as providing most of the food for the year”.

Others who perhaps didn’t have gardens or allotments or just wanted others to deal with the sewage had another option. Andy Bowden recalls that “Many properties still didn’t have amenities then and every week a lorry came along the main road and people came out with buckets of sewage and tipped it into a trough on the back of the lorry, from where it would sink into a tank and be taken elsewhere”. He remembers the truck drivers stopping at the end of the main road after collection to eat their sandwiches!

By 1960s septic tanks and main drainage systems were being introduced around the country and about 1964 plans were drawn up for Harston’s system. The following is an account taken from the Harston WI 1965 Scrapbook:

“Probably one of the most important events in 1965 was the arrival of the firm Biggs Wall to commence laying drains. Hope immediately ran high that septic tanks would soon be superseded and expenses of emptying them a thing of the past. But then we heard that the new sewage station had yet to be built, pumping stations installed and at least two years elapse before liberation from drainage in the garden.

Button End, Harston, has seen surging activity throughout the summer and when the road had been resurfaced and the drains safely embedded, more large-scale equipment arrive and a pumping station begun at the entrance to the “Gap” which is a cart track over Farmer Crow’s fields. Biggs Wall are everywhere. Men’s coats bear the name, lorries, vans, tractors, and dominating all, a great swinging crane. Prehistoric remains have been found in Harston and amateur archaeologists optimistically peer into the depths. So far without result.

The men come from Bury St Edmunds by road every day and work co-operatively and cheerfully through the rain and squall, brightening the children’s lives with friendly jokes and calling for more trumpet practice from one of them. “The foreman doesn’t like it!”. Generally voted a good team.

Behind the mud and chaos of the emerging pumping station, the sugar beet is being harvested, red tractor and blue angular loader working steadily to feed the nation’s craving for sugar. Bringing the beet out is never an easy job and this year it has been harder and wetter than ever and with fewer farm workers to do the job”.

Also in the Scrapbook was a sketch of the new pumping station. A feature of the new system was the installation of stench pipes to dispel to the atmosphere the build up of gases in the sewage pipes. Two of these still exist – one in Button End and the other where The Drift meets the High Street.