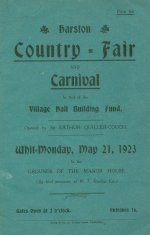 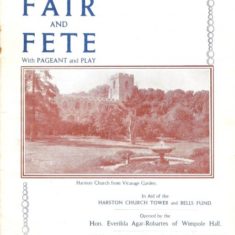 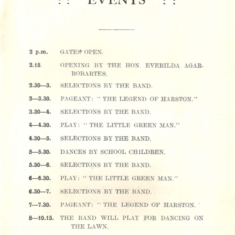 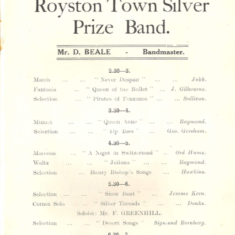 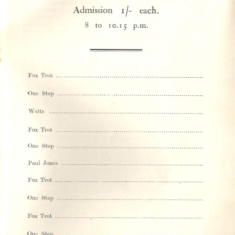 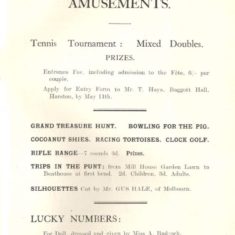 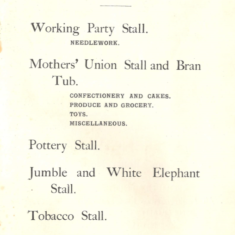 The Whitsuntide annual feast or fair had a long tradition in the village. By the twentieth century the associated fair that was always held on (Swan) Green was accompanied by other activities such as the pageants organised by Helen & Mary Greene of Harston House to involve most of the village; first to raise money for a village hall, then for paying for renovation of the Church bells. the 1929 programme shows money was for the Church bells.

The school logbook and newspaper record some descriptions of the events.

1877 May 11-  School log book: “ Attendance small this week. Many of children kept at home by parents to assist in whitewashing & cleaning their home preparatory to Harston Annual Feast at Whitsuntide.  May 18: broke up for Whitsuntide holiday – one week.

1923: a newspaper wrote:
At Harston on Whit-Monday the past met the present and the sun shone most of the time to celebrate the occasion. The first thing one noticed was the inevitable fair ground on the village green and that in itself was not very remarkable but a casual glance at the round-abouts and the swing boats revealed an extraordinary blaze of gay colours. Closer inspection discovered ladies in the becoming dress and high pointed hats of the 15th century, maids-in-waiting, pages, an odd monk or two and a host of villagers in trunk and hose all enjoying the fun of the fair.

‘The Fair, or Feast is still held on Whit Monday on The Green near Harston House. It is believed to have been a large fair in the middle ages but its importance has gradually diminished. The present inhabitants can remember the time when there were many attractions besides the merry-go-rounds and swings. Dancing would take place in the evening on raised booths and also juggling and wrestling and so forth whilst flaring naphtha lights lit up the scene and shone on the brightly coloured booths and on the faces of the excited crowd. This feast was the great event of the year and up to a comparatively late date was carefully prepared for.

‘Daisy’ ( 102 in April 2017) part of the Manning showman family from Wyboston, recounted her memories of working at the annual Harston Fairs. She particularly remembers one visit in 1932 to Swan Green in Harston, as her daughter was born in a caravan there. Although named Daisy, the daughter was always known as Swannie as she was born when they were at Swan Green. The fairs continued on Swan Green until about 1936 when they moved to the Police House field (The Park opposite Park House). She can’t remember why the fair was moved there but when the war came the fairs stopped (as you couldn’t have lights and the engines were needed).

The main ride was swingboats and owned by ‘Darky’ Henry Manning (nicknamed Darky as he was dark skinned). In those days they had traction engines to move their equipment. The showman steam engines had dynamos attached that would power generators that would run the main ride but also all the bulbs which lit up the ride. Many people were fascinated by the lights as this was often the first time they had seen lights lit by electricity. People in country areas especially were still using lamps. Daisy remembers that the swingboats went up over the fountain on the Green and she could remember the smell of the bread being baked at the nearby bakery.

In addition to the main ride there were juvenile/children’s rides- called ‘dobbies’ that were hand driven- the showman hand to wind a handle- as they didn’t have enough power for all the rides. They also had games in the middle- a coconut shy, roll-a-penny, hook a duck, darts, etc. These were called ‘sheets’ as they had a sheet behind the stall. The rides were a penny or two but on ‘Penny night’ they were all one penny. That is all the fair was in 1932. They were little then as people in each village had little to do in way of entertainment, and they were well attended.