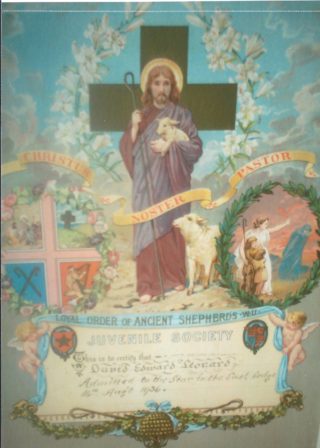 From newspaper records and the school log book we know the village had annual celebrations for various clubs, the Ancient Shepherds/Loyal Free Shepherds being one. From reports the club must have been founded in 1847.

Ancient Shepherds ‘Social Brothers Lodge’, 3rd anniversary, meeting at The Swan Inn, 70 attendees, dinner with ‘host Cornell’, ‘ale and the weed’, walked through the village wearing the colours of the Order and carrying flags, band played the National Anthem.

At the annual anniversary of the Free Shepherd Society at the White Swan on July 5, 165 members met at the Band Room, with a mounted ((Mr Cornell’s horse) Guard of Honour, with full uniform, helmet and sword, they then processed through the grounds of H. Hurrell, to the gate of the Reverend Durbin, through the grounds of Harston Manor (F. W. Rowly), and then to Mr F.H. Smith and then to the White Swan. A large tent had been lent by J. Philips, they played cricket and other games, and after supper, 2-3 hours were spent ‘in the usual way’. Officers presiding were: F. Butler, J.Newling, A. Wisby, A. Jude

The Loyal Free Shepherds’ Society held their 21st anniversary meeting at the White Swan Inn on Tuesday. More than 200 members attended the dinner hosted by Mr & Mrs Cornell, with meat supplied by Mr Robinson. A marquee was lent by J. Phillips of Royston. The Barrington band played, and games of cricket and bat-and-trap ensued. After supper, glees, trios and songs were performed, and Mr F. Butler proposed 3 cheers for the host & hostess. Some members came back the next evening, to finish the feast.