January – letter soon for approval concerning roads in Harston. Talk by Miss Childs, from Sire Hall, ‘Work carried out in the interest of Town and County’.

March – birthday night one act play ‘All for Art’ written and produced by Mrs Armstrong.

May – letter of thanks from W.V.S. for helping refugees. Talk by Mrs Marshall ‘Life in the Fens’.

June – resolutions suggested, badge for W.I. member with 15y ears safe driving and carrying a child on a bicycle without any safe guards should be an offence. Letter to be sent to Minister of Transport deploring traffic conditions in Harston. Members voted against Cambridge City Council being granted County Borough status. Members agreed that it was undesirable that Cambridgeshire should be severed from the City and expressed their willingness to attend a protest meeting in the Guildhall on June 30th. Talk by Mr Kingdon, Headmaster of Coleridge School, ‘Hidden Treasure’.

July – approval wanted for stamp machines in the village. Talk by Mr Brown ‘Clocks and Watches’.

December – praise for Miss Greene and for everything she had done in the village, moment to remember her as she had recently died. Mrs Stocker had given rose plants for the war memorial site. Farthing collection in the village. Talk by Dr Armstrong showing coloured slides ‘Visit to Leningrad’.

May – talk by Mrs Litchfield ‘Nursing’. Members enjoyed outing to London to see ‘My Fair Lady’.

October – 2 resolutions voted on, (1) Eastern Bus Service could be better, (2) age fee for motor cyclists should be raised to 17 yrs.

February – Mr Ludovic Stewart came at short notice to entertain with everyone singing.

May – Over 60’s invited members to see films ‘Safety in the Home’ and ‘The National Children’s Homes’. Talk by Mrs Hurrell ‘Rural District Council’.

November – talk by Mr Hoather ‘How wine is made’. Visit arranged to see ‘The Black and White Minstrel Show’.

March – Birthday Night. Agreed to abandon January meetings and have one in August instead.

April – A.G.M. Motto ‘All for each and each for all’. Donation to Freedom from Hunger Campaign. Talk by Mrs Hall, V.C.O. ‘The Consultative Committee.

May – talk by Miss Jolly, from County Centre, ‘Summer Picnic Food’. Letter of thanks from Chesterton Hospital for eggs.

December – talk by Mrs Armstrong ‘Legend of St. Nicholas. Talk by Mr Lyn Thomas’ Children’s Relief International’, explaining the work done in the displaced camps in Europe. Also slides of Germany and Austria when he and his family entertained at the children’s camps and hospitals.

May – talk by Miss Townsend, of Shire Hall Cambridge ‘Milk and cream dishes’. Care of the memorial green was undertaken for the month of May, June and July by Messers Austins, Bocken, Cook and Miss Wright.

July – Mrs Armstrong asked for helpers on 14th July, when the old people from Chesterton Hospital are making their annual visit to Harston for the forthcoming Garden Party. The over sixty club has also been invited. Talk and demonstration by Mr and Mrs Harvey ‘Old Tyme Dancing’.

October – Harvest Supper, 100 people attended including members and guests sat down at gaily decorated tables to an excellent cold meal. Guest artist Mr Ronald Carter playing on the organ. Occasion concluded with 4 members being ‘The Beatles’.

February – talk by Mrs Humphrey ‘Family Planning International’ , an organisation working in 36 countries. Members were asked to agree that £5 should be spent on refreshments for birthday night, also whether they would like a speaker or a social evening

March – letter from Churchill Memorial Fund. Talk by Miss Jean Reddy ‘Adventures on her travels while singing in concerts and operas at home and abroad’.

April – A.G.M. Miss Wright to represent W.I. at the Royal Garden Party at Buckingham Palace on 31st May. Motto ‘Kindness is one thing you can’t give away, it always comes back’. Mrs Stearn volunteered to take the eggs collected for Chesterton Hospital to the hospital and the silver paper will be taken to the W.V.S. by Mrs Wilson.

May – talk and demonstration by Miss Mansell ‘T.V. Snacks’.

June – Mrs Stearn spoke of her recent visit to the AGM at the Albert Hall as our own delegate – the opening of the second days meeting made a great impression on her, in particular the beautiful array of hats! The theme of this year’s AGM was the Future of the Countryside and the motto Human, Courage and Integrity. Talk by Miss Wright ‘Trip to Buckingham Palace Garden Party’ as our chosen member to attend the Royal Garden Party. Miss Wright dressed in her lovely outfit said that she had thoroughly enjoyed herself and afterwards felt it was just like a wonderful dream!

October – harvest supper, entertainment by members and Mr Carter on his organ.

November – Mrs Sellen to compile a scrapbook of Harston and asked for any information from members. Talk by Miss Brock ‘Art of Make-up’.

February – £5 donation to V.S.O. towards sending a volunteer to an underprivileged country. Talk by Mrs Wicker ‘First Aid in the Home’.

March – 47th Birthday night, ( article in the newspaper). Members to pay 6d for refreshments. Fashion Show by Mrs Rowell, including teenage clothes and for the fuller figure.

May – reminder regarding driving skills test. Talk by Mrs Middleton, from Health Department, ‘Cervical Smear Test’. Drug Addiction meeting at Great Shelford on 13th May to which several members are going. A letter from Matron of Chesterton Hospital thanking us for eggs was read.

June – Mrs Rowell gave details of the 5 dozen cups and saucers which the institute have agreed to buy to be used at the monthly meetings. Talk by Mrs Hearne ‘Holiday in Denmark’.

July – talk and film slides by Mr Lewis ‘Work by crippled Ladies’ who made plastic flowers to sell. Mr Lewis was an engineer and evangelical preacher. He wanted to set up a home for disabled and impoverished women and girls. In 1866 he founded ‘John Groom’s Watercress and Flower Girls’ Christian Mission’.

August – no meeting, instead a mystery drive around various villages and finally finished at a restaurant for a delicious meal.

September – names taken to go to London Theatre to see ‘Black and White Minstal Show’. Members asked to join the County choir for performance of ‘Messiah’ to be held in the Girl’s Grammar School. Talk by Mrs Fordham ‘Avon make-up’.

October – Harvest Supper, over 90 guests, entertained by Harston Follies, dancing and songs from ‘My Fair Lady’.

December – talk by Mr Aldridge ‘Visit to the Holyland’, illustrating with coloured slides.

February – £5 donation to village hall funds, part of the proceeds from a public performance of Harston Follies in December Talk by Dr Thompson ‘Trip to America’, slides showing many aspects of life and the weather.

March – Birthday Night, supper bangers and mash, then games and singing. Invite to coffee evening at Mrs Rowell for funds.

April – A.G.M. Suggestion of a donation to the ‘Management Brook Bursary Appeal Fund’ for students 16-18 years who wish to stay in education but do not have the funds. Trip to Albert Hall to see Red Army Ensemble. Talk by Mrs Steart ‘W.I. blankets’. Motto ‘Be game but not grouse’.

May – talk by Mrs Pease ‘Wedgewood Pottery’ showing slides of the history.

June – Mrs Rowell appealed to members for cake stall at the fete to be held at Park House to raise money for the village hall. Talk by Miss Smith, local health visitor, ‘Visit to the Holy  land’, describing what she did and that fighting had broken out that week between countries she had visited.

August – cricket team to enter the Sports Gala competition. Talk cancelled as the Police dog handler was called on for duty.

November – visit to Sawston Paper Mills. Suggestion for outing to see ‘Cinderella on Ice’ at Wembley. Joining forces with Young Wives to sing carols at Chesterton Hospital has been fixed for 20th December. Our usual small gifts for Harston Ward would be taken and a small collection was made at the end of the meeting.

February – letter of thanks from Professor Mitchell for donation to his Cancer Research Fund. Talk by Mr A. Puck ‘Cambridge City and surrounding area of East Anglia’.

March – Birthday Night, demonstration from ‘The Triple A Square Dance Club’ from Alconbury.

May – talk by Captain Tyler of the Women’s Royal Army Corps, ‘WRAC Life’ using slides and showing aspects of work and play over 20 years.

June – offers of cut price bushes by Scotsdales. Talk by Mrs Freeman ‘Knitting’. Praise given to the cricket team.

July – garden party invites to Over 60’s and to patients from Linton Hospital. No Harvest to be held as the village hall was to be decorated, coffee evening instead. Talk by Mrs Jude, ‘Needlework’ showing samples.

August – letter of thanks sent from Linton Hospital. General discussions on W.I. problems, including increase in subscriptions.

September – talk by Mrs Robertson from County Centre ‘Supper Savoury Snacks’. Attention of members was draw to the Handcraft Exhibition at the Guildhall on the 5th and 6th September where several items from our Institute would be on show. 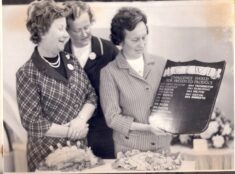 March – reminder of egg and silver paper collection next month. Talk by Mr Hall ‘East Russia’ slides and describing he joined a party from Fisons to help with work on chemical plant in the town of Ufa.

May – volunteers asked to help at the village fete in June. Talk by Mr and Mrs Bendall ‘Care of Hair’ demonstrating various hairstyles.

June – volunteers for a cricket team for County Sports Gala. Letter from Fisons confirming the hall could be used for W.I. Christmas dinner free of charge. Talk by Mrs Carpenter ‘Hints for deep freezing’.

September – agreed to a £10 bursary for Denman College. Talk by Mr baker ‘Holiday in Yugoslavia’.

October – agreed shopping trip to Norwich. Talk by Mrs Chapman ‘Visit to America’, and was a delegate to A.W.C.I. Conference, attended by women from around the world.

December – volunteers asked to embroider kneelers for Ely Cathedral as they needed about 1500. Talk by Mrs Newton ‘Christmas Decorations’.