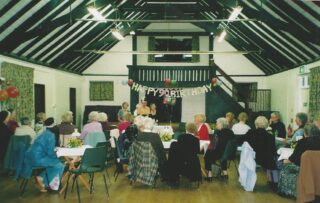 This event took place in Harston Village hall, to which many old member’s, officers and friends were invited as well as guests from neighbouring Institutes.  The theme was memories and memorabilia from the nine decades since the Institute was established in 1920 and the speaker, Hilary Sage amused us with tales on such a theme.

The evening started with champagne kindly donated by a well-wisher and proceeded with games, music, the talk and finally supper provided by members and the committee, with finger food, trifle and of course a birthday cake made by Mary Evans.  Some guests entered into the spirit of the evening by wearing clothes reminiscent of the period and the husband of our President made  the evening by serving the drinks and acting as chauffeur, dressed like Al Capone!

Maureen Bloss had put in a lot of work planning the evening assisted by the committee and to see older members of the said committee trying to blow up the balloons was a sight to be seen and savoured!

All agreed that it had been a very successful and friendly evening and we look forward to the next 90 years.

Fun making the Harston WI scarecrow in the shape of our renowned village blacksmith, Harry Lawrance.  Barrington won the competition.  The scarecrows made by WI members were displayed in the gardens at Wimpole Hall during late May and June 2010.

May – Report from Sylvia Jones, Harston WI delgate, at the Annual Meeting held in the Royal Albert Hall 2012.

We did not want to miss Jerusalem – 5000 ladies singing was magical.

Resolution stressed the need for the employment of more midwives. The resolution was carried by 96% for and the result was announced with cheering and applause.  Professor Nick Burton -Kairy spoke against, but eventually left the stage to an outbreak of slow hand clapping from a minority group.

Knitting challenge for the Guinness Book of Records – Sylvia was proud to be one of the 5000 taking part!