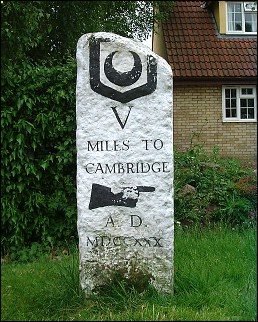 This milestone outside 58 London Road is one of series of stones on what was the main road from Cambridge to London, through Trumpington, Harston, Newton, Fowlmere, Thriplow, Barley, Barkway, Braughing & Puckeridge. It is probably the oldest series of milestones still standing (the ones from Roman times are now largely in museums). With their introduction, travellers were able to note their progress for the first time for a thousand years.
It has the shield of arms of Trinity Hall & a date of 1730 in Roman numerals.
This stone & the others on this route were funded from a trust set up in 1586 from the estate of Dr William Mowse, a master of Trinity Hall who left £1000 for the upkeep of highways in & around Cambridge. Hence they were given the name Trinity Hall Series.
In 1725 Dr William Warren, a trustee of the fund, began to survey the coach road to London. He started at Great St Mary’s church, Cambridge and with a chain of 66 feet he measured the distances and had the milestones installed from 1728 to 1732.
The date was originally shown in Roman numerals, then Arabic script around 1900 and then Roman numerals again in the 1960s.
During WW2, fearing a German invasion, the government ordered the removal of all place names, road signs, etc, & in June 1940 the stone was taken down & hidden in the verge. It was re-erected in 1946
In August 1962 it was given Listed Building status by English Heritage