You are here: Home>Topics>Transport>Early motorcyclists in Harston 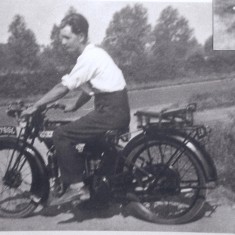 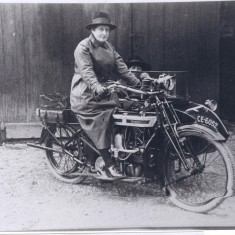 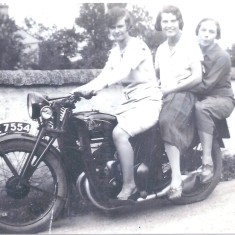 In May 1900 the Cambridge independent Press had reported Motors (car & cycle) ‘nuisance’: Cambridge man (Charles Mortimer) was charged with driving a motor cycle at more than 12 mph (!) in Trumpington; police constables in other villages including Harston clocked cars (by tape measure and an ordinary pocket watch) doing more than 20 mph; some ‘must have been going at 26 mph’!! Motor cyclist fined £1 11s 6d costs.

With the gradual move on to petrol power several families shown in the photos became owners of motorcycles in the 1920s and 30s.

William Ward had a shop next to the Three Horseshoes from 1908-37 and offered motorcycle services as well as bicycle repairs and sales.

In the 1970s Roy Stickler ran Harston Motorcycle Centre but had to close his showroom down due to lack of planning consent, which affected the viability of his business.