You are here: Home>Topics>Transport>Pedal power 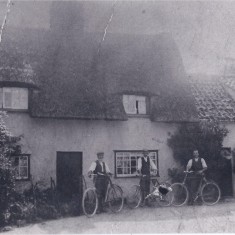 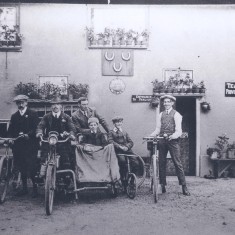 C 1915. Some of the Haylock family with bikes and side car in front of Three horseshoes.
(Deacon) 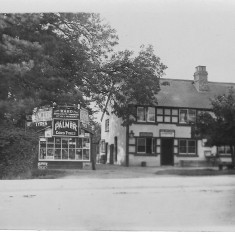 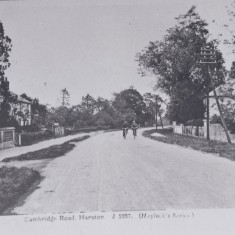 Around the 1900s more families, particularly those who had some sort of business,  started to own bicycles which allowed them to go further afield for their work or leisure. Examples of two local families are shown- the Wisbeys who farmed Fountain farm- a small farm in Church Street, and some of the Haylocks who ran the Three Horseshoes in the High Street. Lad second in from right in the photo is Aubrey Haylock born around 1909.

Harold Northrop’s memories recalled ‘We never had such things as bicycles until we were old enough to work and then it had to be on a credit system of so much each week. I was 13 years old (1916) before I could ride a bike and lots of children at this time never did ride a bike throughout their life. The only chance one or two of us had to learn to ride was when we were required to take the Rev. Baldwin’as cycle to the Station so that when he arrived, now and again, by train he could cycle back to the vicarage. When we now see children at the age of 3 years riding cycles it make one wonder at the great change in our present life style.’

Associated with this was was the development of places that could provide repairs or parts and Ward’s cycle shop provided this for a while next to the Three horseshoes. William Ward was listed in all Kelly’s Directories from 1908 to 1937 as a cycle manufacturer. The  photo shows Ward was also an agent for motor cycles of all makers, too

Mrs Hays (1886-1971) recalled in 1965 memories of her youth (around 1900s) when they cycled everywhere, thinking nothing of cycling to Histon to play hockey. John & Gerald Ives said their father cycled the 5 miles daily from Harston to Histon to work at Chivers from 1930-59.

It is interesting to note that in Sep 1893 the Cambridge Independent Press reported that Frank Beaton of Harston was fined 5s + 3s 6d costs for riding a bicycle without lights. At this time the roads were relatively empty as shown by the photo of cyclists along the High Street.