You are here: Home>Topics>Transport>Local horse-drawn transport 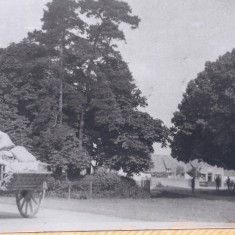 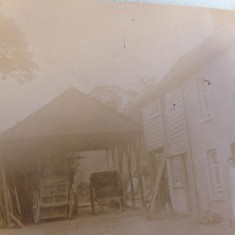 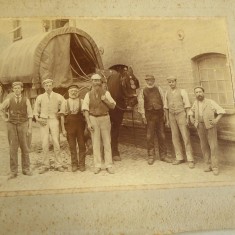 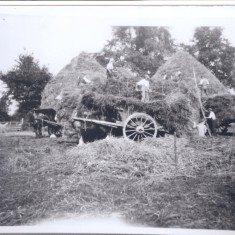 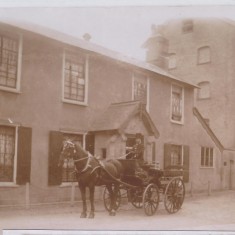 About 1890s. Smiths carriage in front of Harston millhouse
(Deacon) 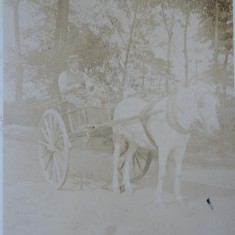 Horse -drawn carts were used to move goods and produce in all businesses in Harston until, and well into, the 20th century. Most farms and the Mill kept many horses to pull the two wheeled carts. After the railway was built carts regularly moved produce to the railway station to send it further to the cities. Carts from the Mill were busy all day long moving grain to the Mill and flour to the Station. Only a few better off families had carriages specifically designed to carry passengers. The Smiths at the Mill were one. The Greene family living in Harston House, another, and the Hays at Baggot Hall Farm.

One early photo shows a fishmonger driving his cart- reputed to leave your gate open if you didn’t buy his fish. Was this Owen Cambridge or Joseph Wright?

It is interesting to note that in Aug 1893 James Huddleston of The Green Man was fined for being drunk in charge of a horse & cart and in Dec 1893 Charles Payne, cheese merchant of Swavesey, was summoned for ill-treating a horse in Harston, with Thomas Archer aiding & abetting. the RSPCA inspector said the horse was lame and in pain through chronic disease. Archer was fined £1 + 19s costs; Payne, 5s + 19s costs.

In the 1930s Kath Rayner’s dad, Fred Collins, would take her as a child in a tumble cart (one with two wheels) to Bateman St in Cambridge to get grain from the brewery which would be mixed with poll (white substance) for feed for the pigs.

During the 1940s the Ives brothers, as young boys, worked at Baggot Hall Farm. John led the horses whilst Gerald loaded the carts with the harvest.

In the early 1950s Jane Peveley helped Jack Ship to deliver milk from Baggot Hall Farm with a horse and cart. Jack would take the horse for shoeing to the Lawrance smithy in the High Street. Originally the Smithys’ would have put metal rims on the wheels. The Willers were wheelrights and carpenters in the High Street and would make or repair the carts.