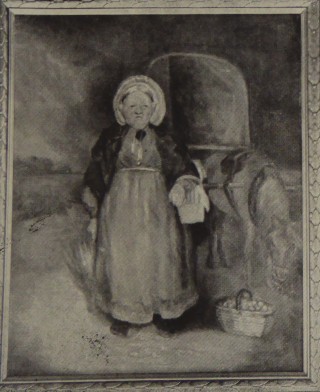 Early Harston carriers went by horse and cart regularly into Cambridge, often Mon, Wed, Sat or Tues, Thur, Sat. They carried out transactions for other residents of Harston and never forget the tasks. In the 1860s & 70s  Fanny Cornwell (Mrs Francis Cornwell) lived in Button End and conveyed goods by horse and cart to and from the Bushel & Strike in Cambridge. Once she was robbed but the culprit was caught. Fanny’s father was the landlord of The White Swan. She was an interesting character. Apparently after buying all her wears she would go into the Eagle pub in Cambridge where she stayed until she was literally legless, the landlord of the Eagle would help her into her cart and the pony knew its way home.

In 1937 Helen C Greene wrote about her: There was an old carrier woman called Fanny Cornell who lived along Button End fifty or sixty years ago where she had a little shop in a cottage. She principally sold hair oil and sweets and she went twice a week to Cambridge with her carriers cart charging her passengers 3d each way. She could neither read nor write, but had a wonderful memory and never forgot any commission, no matter how many she had, nor did she make any mistakes in her accounts. She used to tie up the money in different corners of her hankerchief. Her return home on market days was very late indeed, and as the Trumpington road was very lonely, and not too safe in those days, she always carried a large pepper pot to throw in the face of anyone who tried to molest her. This would have been no light task as though, for Fanny was immensely strong and would carry a 9-gallon cask of beer to the cart and lift it in with apparent ease. She did drop one unfortunately on an unlucky day and was laid up with a broken leg in consequence.

Mrs Cornwell’s daughter married into the Thompson family and they took over the carrier business until around 1920, when Norman Pennell Thompson started a coach/bus service.

Henry Oakman, a member of the Thompson family said “Mr Thompson did all the shopping for our village, for 2d a parcel. He would get anything you wanted, even knickers, or a baby’s bonnet, or children’s shoes. And he never made a mistake. Of course people couldn’t afford to go to Cambridge in the old days when wages were 10/- per week…”.