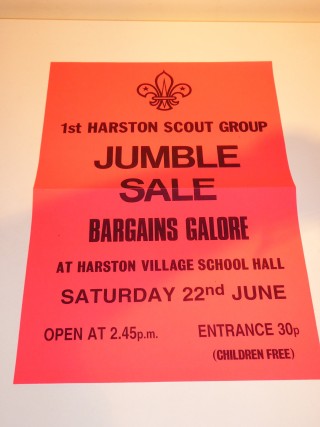 Harston Scout Group was reformed in March 1969 when a need was identified in the village and although David Clark was asked to help he soon found himself running it, using his background in the army to help provide a programme of well organised adventure and fun in a controlled environment.

When he retired as Group Scout leader in December 1995 Roger Summerfield took over, having been one of the scout leaders for many years (since 1972 in Harston) and gone himself from Cub days in 1948, through Scouts, Senior Scouts and a World Scout jamboree in 1957. The present Scout Troop covers mainly the villages of Harston, Hauxton, Newton and Foxton.

Popular activities were canoeing and canoe races. However, in 1986 the Scouts paddled for 6 hours on the river Cam to raise around £1,900 to send a handicapped girl (Lindsey Angell) to the United States for Treatment. Roger Angell was one of the founders of the Harston Scout Group. The 1st Harston Scouts were also famous for their large jumble sales they held yearly at Harston School as one of their very successful fund-raising efforts. Another of their successes was winning a competition in 1992 for original and inventive daffodil planting to improve the local environment.

The Cubs were started by Betty Holmes in 1973. She did a wonderful job as leader with many Cubs progressing on to the Scout Troop. She retired in July 1996 when she reached retirement age for all leaders. Brenda and Colin Free took over running the Cubs in October 1996 and still have many Cubs on Wednesday evenings in the School Hall. Brenda’s father was a Scout from 1937 onwards and has written his memories of that time.