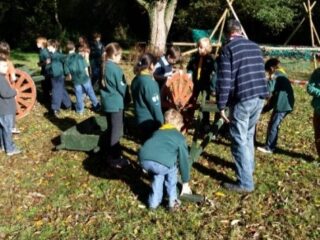 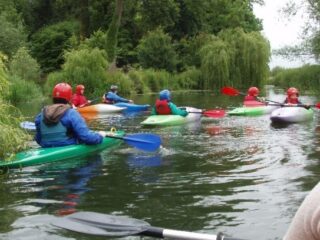 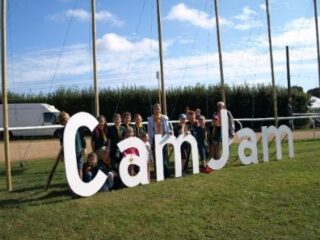 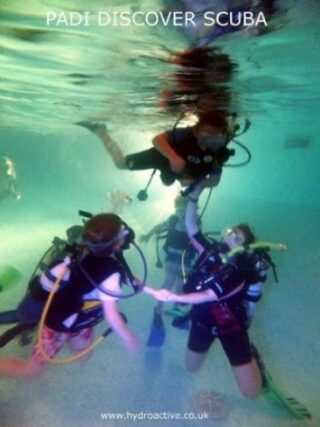 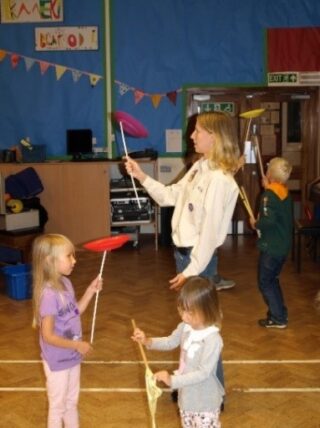 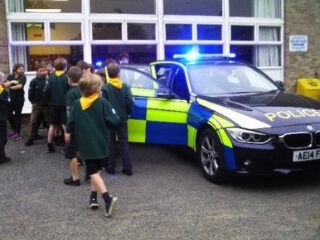 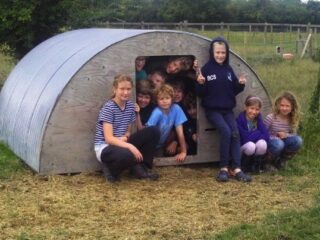 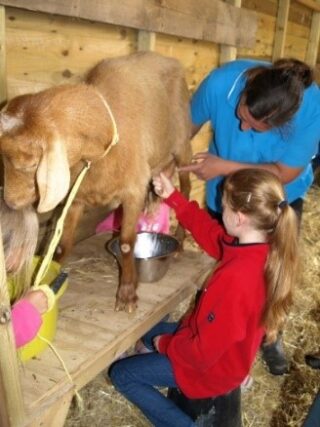 Up close with the farm animals 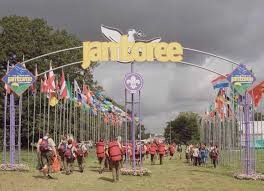 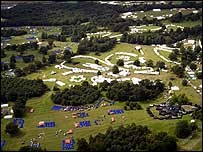 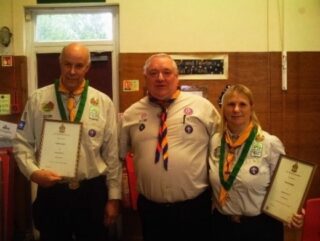 Our son had joined Harston Cubs in April 1996; he had only been in Cubs for 1 term before Betty (Holmes) retired. The autumn term was being run by Roger (Summerfield – Group Scout Leader) and Dave while Roger was looking for another leader. As I had occasionally assisted with the Brownies when my daughter was a member, I thought I would give it a go, so I went along one evening to see what went on. I later informed Roger that I was interested. He then came to our house to complete the paperwork and said that I would need an assistant while looking at Colin (Baloo), who then agreed to assist me.

Learning to run a Cub pack

I knew nothing about running a Cub pack. However, I was issued with a suite case full of books, badges etc. that was previously owned by Betty. I then spent the next week reading and learning all that was needed before my first meeting on 6th November 1996. Fortunately there were only 10 cubs in the Cub pack at the time, all of which I knew as they were in my sons year at school, therefore it was an easy group to start with. I had no idea what to do on the first evening, so as it was the autumn, I showed and involved the Cubs with how to prepare and put our tortoises into hibernation for the winter.

For the second week, as we only had a few members, I thought I would start them on the artist badge. One of the requirements was to make a poster about Scouting, so I got them to make posters about joining Harston Cubs. Over the next week I displayed them around Harston, Newton and Hauxton, and so the phone started ringing. Soon we were full, and then had a waiting list that kept growing and had to turn some people away.

Over the years I have enrolled nearly 300 Cubs, that includes naming 300 scarves, with 300 names to remember (Colin always found this difficult). I’m pleased it was not all in one go, but spread out over the years.

Activities over the years

We have taken part in many activities with the Cubs such as Challenge days that were held at St Ives each autumn. This involved eight challenges including climbing wall, canoeing, orienteering, woodwork etc. Camia is a Jamboree that is held every 4th year and is aimed at the Scouts and Explorers from all around the world. They also have a day for the local Cubs to attend, therefore we always took a group along, where they had a go at a wide range of sports including rifle range, archery, ice skating etc. There were also a wide range of crafts, and fun activities.

Other activities I have arranged for the Cubs are an archery evening with Hertford archers, trial Scuba diving with Letchworth dive club, a visit to Amey Cespa recycling centre, Circus skills, capoeira, Samba band, martial arts, visits from an airline pilot, fireman, policeman, dustman, and many others.

Each summer we have taken many Cubs on weekend camps, the favourite with the Cubs was at Hawthorn farm Haslingfield, where they were given a farm tour and had a go at milking goats. They also had to collect their eggs for breakfast. One camp at Haslingfield, there was a storm in the night and we woke up to find that the toilet tents had blown away in the night! We hoped no one was using them at the time!

In 2007 we were lucky enough to attend the Cherry Jam 100th Anniversary Camp at Cherry Hinton hall. There were groups from all around Cambridgeshire there for the weekend with a wide range of activities for all to join in. However, typical English weather, it rained and rained all weekend. By the end of the camp, people were having to be towed off the site due to mud. It looked like a typical Glastonbury muddy weekend.

As 2007 was the anniversary year, thanks to Roger, we were lucky enough to be helpers at the Reunion of people that attended the 50th Jamboree; this enabled us to visit the 100th Anniversary world Jamboree at Chelmsford. This was a Jamboree with thousands of people camping at the same time, and Scouting representatives from all around the world, it was an experience not to be missed.

Leaders recognised with Medals of Merit

2007 was also the year that our daughter Amanda (Kaa) joined us as a leader. She stayed with us being joined by her two children as they arrived, and then she left us at Christmas 2019.
In 2016 we were lucky enough to be awarded with our medals of merit, which recognised our efforts in Cubs. They were issued to us after the AGM with parents and all leaders there.

Over our time with Cubs we have seen uniform changes and also 3 times the badges have all changed, which we have had to learn the requirements for. We have also seen girls being allowed into Cubs. Roger said he didn’t want this, but I ignored him and took our first girl in January 2011. The number of girls soon increased and showed to be as enthusiastic as the boys in all activities. We have got to know many people during our time in Cubs, some we still see and others have moved away to other countries. We have had 2 of our Cubs that have moved up to Scouts then Explorers, then have stayed with us to become leaders.

We are not leaving totally, but help in the background with accounts, disclosures, assisting at camps etc. when needed.

We thank everyone for their support over the years, and it has been so nice to get to know so many people both leaders and parents that we still see around our area.