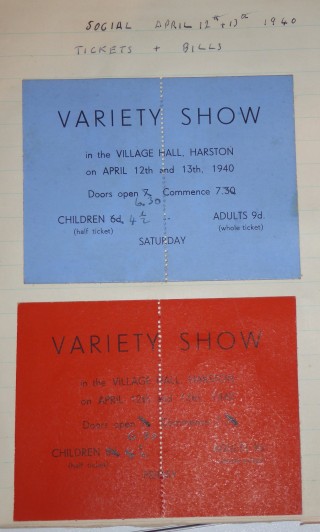 In 1940 the Scouts carried on by themselves without some scouters/leaders. They were very busy with paper collecting at that time as Scouts all over the country were given the job of collecting waste paper to “help win the war”. This went well initially, but in the end the Guides had to take half of the village from the Coach and Horses pub.

1940 saw funds beginning to get low and they were worried as to whether they could manage a show on their own with no Scouter to assist them. They heard of Mr Wiggins, an evacuated Gym instructor, who was billeted in Harston. Mr Welford visited him and got his help until after Whitsun. He helped train the scouts in gymnastics for a Variety Show on 12 and 13 April with many rehearsals made for the show, which went off well.

During 1940 Harston Troop had difficulty retaining its Scouters who led each patrol. John Barker who had been with the Troop since it was started was made Assistant Scoutmaster, but was then called up so D Samuel was promoted to A.S.M. (Assistant Scout Master). Owing to the war the Village Hall was taken by the Army. Then they tried to get a new Scouter but all suggestions failed. The Senior Scouts volunteered for Air Raid Patrol and Home Guard duties and gradually the scouts stopped meeting, and stopped paper collecting.

At a January 1941 scout meeting led by Mr Richards, the Scout Commissioner for South Cambs, scouts were asked about paper collecting and whether the scouts would help with a fire-watching squad being arranged by Miss Green. February meetings were in Miss Greene’s studio, then in the Oddfellows Hall and they were with new Skipper McFarlane in March. In October 1941 Scout Master Michell took the meeting in the school woodwork room. They decided on new Patrols – Foxes and Lions and put new notice-boards outside B. Michells and K. Crows. The October 1941 meeting was held in Mr Rodwell’s church with B Michell Scout master (soon to go into the Army November 1941) and G Haylock promoted to Troop leader. However, no more meetings were recorded in the log book so we assume the scout troop disappeared.