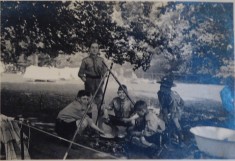 The Scouts had various camps and joint meetings with other troops. The Whitsun camp was often at Hinxton or Linton – scouts with bikes were expected to cycle there. They set up kitchens around camp fires, sang camp songs had competitive sports and carried out tracking and stalking. The summer camps were further away (eg Berkshire, Norfolk, South Wales, Eaton Scon near St Neots) and were longer – up to 11 days. The scouts travelled there by train. A winter camp held in Crow’s meadow, Harston, involved cooking, mapping and making a monkey bridge over the river. In 1937 they toured abroad instead of camping in one place – only scouts over 13 years of age were allowed, with Mr Welford the only scouter in charge. They went to France, Holland and Luxembourg and attended a jamboree. 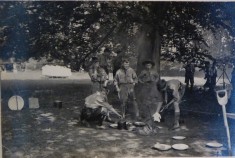 The Scouts prepared for a Variety Show event in the Village Hall at least once a year. The scout’s first Social (February 22 1935) had them providing entertainment in the form of sketches (one named the ‘Lion Tamer’), First Aid displays, singing (Birds of a Feather), rope climbing display, boxing, a cinema show and dancing until midnight. The shows raised money for scout funds. In February 1936 they started a Scout band with the first practice in the Pemberton Arms.

In 1937 it was arranged that the Concert that year (in March) would be a combined one with the Guides to practice for songs. Mr Welford, Mr Sturdy and Miss Bissecker spent much time getting the show ready.
1938 March show was called ‘Fying High’ and allowed some of newly formed Shelford group to join in. A film showed the Coronation at Harston, Haslingfield, Newton & Hauxton. There was no show in 1939 as scouters couldn’t find the time to arrange it.