The early Harston Scouts from 1933

(Summarised by Hilary Roadley from the Scout log books)

The Scout Association in UK was formed and run in 1910 by Robert Baden-Powell. The age range of Scouts was 11-18. It is thought a Troop of Scouts was started in Harston about 1920 but it was short-lived and closed down about 1923. However, a newspaper article dated 11 Nov 1910 stated that an exhibition of military pictures at The Three Horseshoes, Harston, ‘aroused the enthusiasm of the local territorials and the Harston Boy Scouts’, suggesting that a troop was started much earlier on.

In 1933 a resident of Harston suggested, after seeing 56th Cambridge (Haslingfield) Scouts Troop taking part on Armistice Day, that the Haslingfield Scout Master should take in a patrol from Harston as there was no boys movement there. When the 56th Cambridge got too big it would be divided into two troops – one for Haslingfield (including Barrington and Harlton) and one for Harston (including Newton and Hauxton).

In January 1934 Mr Royston, the Headmaster of Harston School gave the names of boys of suitable ages and they began to meet either in the Village Hall (given free if not booked) or Oddfellows Hall in Harston. The Patrol met in Harston as few boys had bikes to get to Haslingfield. Assistant Scout Master Nesbitt Hefferman (aged 20) looked after the Harston part of the Troop, sometimes assisted by Mr Thompson, and by January 1935 by Mr R S Sturdy. 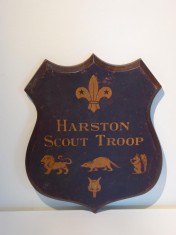 At the first meetings in February 1934 were boys from Harston, Newton and Hauxton. This first Harston Patrol was called the Squirrels. By March 14 1934 they divided into two patrols- Squirrels and Beavers. January 16 1935 saw a Newton Patrol created called the Foxes. A Lion patrol had been created by summer 1935 but by July 1936 the Beaver Patrol had disappeared. The Scout Shield found later must show the Patrols of 1935 with Lion, Beaver, Squirrel and Fox.

Lists from Log book July 10, 1936 show when the Harston Troop was re-organised so each patrol was linked to a village so they could be called together at short notice. Lions & Squirrels were Harston, Foxes Newton, Tigers Hauxton , Hippos Haslingfield. Each patrol met on a different night and had a separate room or barn to meet in, and had one Scouter to each. The Troop notice board which was made by scouts in Harston school was finished and put up outside Mr Ayres shop.

Between October 1936 and December 1939 the number of Patrols changed as leaders came and went. Hauxton Patrol had to join in with the Squirrells of Harston, then the Squirrel patrol had to be given up so it was decided a senior patrol would be formed, the younger ones of the Squirrels joining the Lions with Harston & Newton patrol meetings held together.