You are here: Home>Topics>Wartime>World War 2>World War 2 Effects on Harston 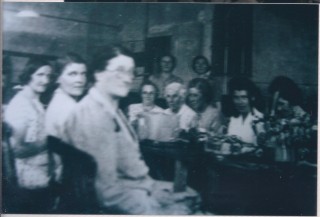 Mr F Goody was the wartime Baptist Minister. He took over as a temporary postman. In the early part of the war he set up a canteen in the schoolroom for the use of troops stationed in the neighbourhood. Later on the church was notified that the government intended to requisition the school room for use in the war effort and it was taken over by Messrs. Pye Ltd from Sept 1943 until the end of the war. Many local women took over the jobs in the factory as the men had gone to war.

In 1940, when danger from enemy action was imminent, it was decided that the vestries were the strongest part of the building and so the partition dividing the two old vestries was removed. The enlarged room was then used in place of the schoolroom (which was taken over by Pye Ltd). During the war, blinds were fitted to the church windows and internal shutters in the schoolroom for blackout purposes. The partitions in the central pews were removed for easier accessin emergencies. During the war, steel was in very short supply and the ornamental cast iron railings from the front of the manse were removed as a contribution to the national war effort.  (Source: 200 years of witness: a history of Harston Baptist church 1786-986 by Arthur Wisby).

There was a camp at Newton but a number of soldiers were billeted in the village. Joyce Carter can remember some in a house called Pinehurst and some in Mr Hutchinson’s large old house to the left of the school.

Lois Elsdon Sparshott has her mother’s diaries – opens in new window – recording how her mother & aunts who lived in Newton View (last house on left in High St going to Cambridge) all attended village dances in Harston Village Hall where they met and entertained young servicemen who were billeted locally for a few weeks before being sent into action. The whole Matthews family often invited them back for tea to make them welcome while Lois’ grandfather Reg Matthews served in both wars with his son Alan serving in the RAF.

Harston village had a number of farms rearing pigs and chickens which helped.

Brian Willers remembers his family coped well during rationing time as his parents kept pigs, chickens and geese. They would register 11 pigs with the government but have 12. The local butcher would kill and smoke the twelfth pig and take half for himself. The rest was hung in the Willers’ pantry and Brian can remember the smoke smell. Brian’s mother’s father was a farmer and wheeler-dealer in Norfolk. They would get a stone of sugar from him at a time but have to hide it on the way home; they were once stopped and searched but they didn’t move the children off their seats and they were sitting on it! They also hired a field from Hurrell’s to keep their house cow. Brian was expected to milk this morning and night, but it gave plentiful milk from which they made their own butter and cheese.

As many farm workers had gone to war young boys such as Gerald and John Ives worked on Hays’ farm leading horses that pulled carts loaded with harvest.

Harston had many evacuees during the war and Mrs Bissecker was the Billeting Officer who sorted out which children went to which families after they had arrived in Harston by train. There were a number of evacuees at Harston school but they integrated well, recalls Val Joslin.

Val Joslin’s family used to live in East Ham, London but at the age of 6 she came to Harston with her mother and grandmother because their home had been bomb-damaged during the Blitz of 1940/41. They had relatives here – the Pasks – and moved into one of their cottages. It was quite a shock and change of lifestyle to find themselves with no electricity, no running water and a toilet at the end of the garden, as their terraced house in London, although small, had these basic amenities. At the end of the war, when her father returned from serving in the RAF, they decided to stay in Harston as their London home had been ‘compulsorily purchased’.

James ‘Jim’ Kilfoyle arrived in Orwell in the autumn of 1941 as a nine year old evacuee Londoner following the destruction of his home in Bow by bombing. His family had been rehoused several times but finally came to Cambridgeshire where the men of the family were required to work for local firms. The extended Kilfoyle family were billeted for a year with farmer Dickie Long at Maypole Farm on Orwell Hill.

In Orwell there was no room for the children in the school and no-one to teach them. Jim says

“I never had a table and chair to work at until I moved to Harston School when I was eleven. Even then, we were put to work on the village allotments in all seasons, rather than getting formal tuition in school.”