You are here: Home>Topics>Wartime>World War 2>Memories of World War 2

From a collection of Harston memories, summarised by Hilary Roadley 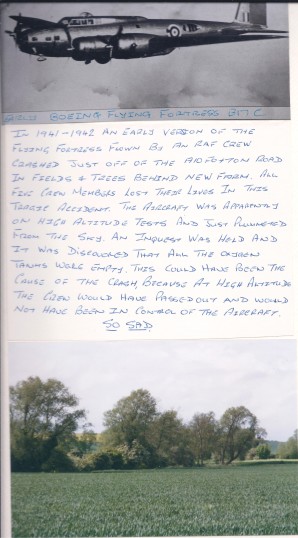 When war broke out

The Ives brothers remember the day war broke out; they listened on the radio. All windows were taped and blackouts ready. When the blitz was happening, they could see light in the sky in Harston

Tony Gatward remembers the Village Hall was taken over by the army in WW2, ENSA concerts were held in the hall and soldiers camped in bell tents behind the hall. Gerald & John Ives remember the Village Hall being used as an army mess.

Lots of military travelled through Harston and tanks rolled through the village along the High Street. Apart from that, the roads were very quiet. In 1941-2 an RAF plane crashed on the Foxton Road and all the boys rushed out of school to see it.

Kath Rayner remembers, after the evacuation in Dunkirk there were a lot of troops in Harston and the troop seemed to change after about six months. The Village Hall was used as a cookhouse and dining area. Ms Bliss’s ‘pest’ house was taken over for offices and Pinehurst had tents and nissan huts in the grounds. The big house to the left of the garage next to Sheepshead Row had the officers quarters. There was also a canteen in the chapel and in the Oddfelllows Hall. In the Drift trackway they kept all the lorries and tanks as these were screened by all the bushes, trees and woods. There used to be a sentry box at the entrance- a piece of cement still remains where that was. At night you could hear the revving up of lorries when they went out on manoeuvres. Brenda Free’s mum told her that the Orchard behind school had trenches dug for shelter during air-raids.

A German bomber dropped a land mine near Newton and made a huge hole in the field, which the children went to play in! They thought it was trying to get Duxford.
Joyce Carter recalls at the beginning of the war someone allegedly reported signalling from a clunch pit in Newton. During the previous night parachute bombs had been dropped on Newton on the Cambridge Road, shattering many windows. Apparently a man’s footprints were traced going behind these houses over to Harston, where people heard a rifle sho t- thought to have been someone shot in a shed? Tony Gatward said people thought there was a spy guiding German planes in who may have lived in piggeries area behind cottages next to old Manse on High St. A lot of soldiers were searching for him in ditches? It was probably the same moonlit night during the war when the Barrington Cement air-raid siren went off that Kath Rayner’s family went out to their dug-out at the bottom of the garden (they had a long garden then at the end of Manor close). Her dad went out because he heard rustling in the leaves and early the next morning there were troops about in the High St stopping her mother getting on the Cambridge bus – presumably searching for possible spies.The true story is not known.

The camp for German and Italian prisoners was situated along the A10 between Hauxton and Trumpington and stretched for about ½ mile. Most of them were hardworking and polite. Some worked on local farms and Brian Willers recalls German prisoners who worked at the Willers yard and several stayed at Oaktree Cottage. One worker they knew, called Fritz, a Czech, worked for the Seagraves and eventually married their daughter, so stayed here

George Thomas Willers carried on the business in Harston during World War II when his son Frederick G was sent to work at Marshalls, in Cambridge, on aircraft as he was a carpenter/joiner.