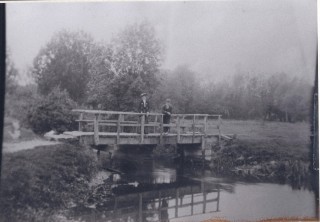 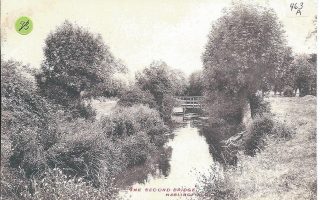 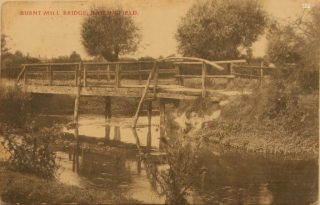 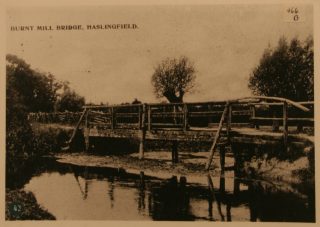 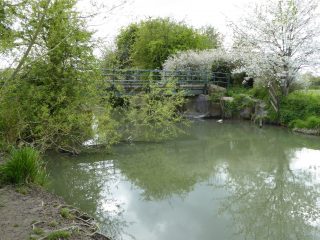 According to the website ‘British History On-Line, Haslingfield had three mills by 1086. One, called by the 1360s Haslingfield Mill, stood far to the west of the village on a bend in the Rhee a mile north of Harston. From the 14th century to the 16th its miller was regularly accused of flooding Harston’s meadows to its south by raising his mill dam too high. The mill was burnt down about 1643 and not rebuilt.The site was later called Burnt Mill Close and gave its name to the bridge which has for centuries connected the parishes of Harston and Haslingfield. The bridge provided an important crossing point for travellers going along the ancient Mare Way, past a barrow at Money Hill  on to Hauxton.

According to Nora Cannell in Memories of a Haslingfield Childhood, originally published by the Haslingfield Village Society in 1983, there used to be two bridges, only one now remaining.The old river left the new at the first bridge and meandered through the meadows, meeting up with it again beyond the second bridge, which still exists.

Nora recalls that the river was regarded as the local beauty spot until marred by the felling of the trees and the grubbing out of hedges and shrubs. The footpath was bordered by the river on one side and shrubs and overhanging trees on the other. Beyond these lay a stretch of marshland where tall yellow iris, willow weed, meadow sweet, purple loosestrife, marsh marigold and the delicate mauve cuckoo flower grew unrestrainedly. Overhead, festooned among shrubs and trees, hung the wild hop, belladonna, honeysuckle and white bryony. It was a natural habitat for the common birds and the wild fowl. An occasional swan’s nest could be found among the bulrushes and reeds. This was always a favourite bathing place for the village youths. The footpath continued from this bridge to Harston or Hauxton, as now. The meadows along the river were populated by walnut, elm and chestnut trees, and were a favourite site for campers and family picnics.