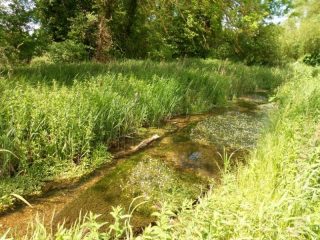 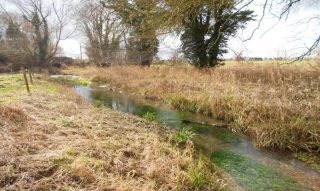 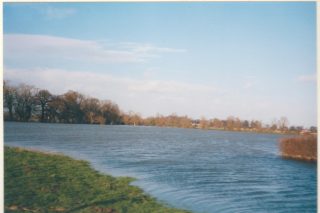 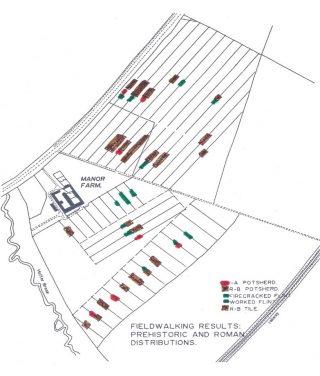 Where did its name come from?

Rather like the Rhee, there appears to be no agreement as to the derivation of the name. About 1300 years ago the Cam valley and its tributaries formed a ‘No Mans’ land between the kingdoms of Mercia and East Anglia. Offa (of Offa’s Dyke fame) was King of Mercia. Was this the derivation of Offa’s Brook as some old Foxton residents call it? Or there is reference in 15th century writings to a ford in this area called Hofforde holte. Is this the later derivation? Rowland Parker in his book about Foxton, The Common Stream, says that the locals called it The Hayditch.

This short stretch of water is approximately 8km in length, rising near Thriplow, passing under the A10 and flowing to the Rhee. As such when the Rhee floods so does the brook, see photo. It is a chalk stream – one of only about 160 in England. It doesn’t flow continuously through its whole length; it can dry up towards Thriplow and Newton, as in the droughts of 2010-12 but not in the Harston stretch.

Whilst not a particularly imposing stream, it nevertheless was significant for early inhabitants of this area. Archeological surveys immediately to the north of the brook have revealed evidence of Iron Age, Roman and Anglo-Saxon occupations which must have used the brook as their water supply. The map is taken from Tim Malim’s book An investigation of multi-period cropmarks at Manor Farm, Harston. Proceedings of the Cambridge Antiquarian Society LXXXII, 11-54, 1993. Similarly, across the A10 into Foxton parish, the site of a Roman villa has been discovered which could have taken its water supply from further downstream.

Rob Mungovan who surveyed the brook for South Cambs DC said that it appears to be elevated above the surrounding land and this is likely to be a legacy of when the mill at Harston was constructed as it would have required the maximum delivery of water in order to drive its machinery. A low level drainage ditch runs beneath the brook, below the Rhee and discharges downstream of Harston Mill.

If you were a gamebird in 1813, it was best to stay to the right of the road as The Cambridge Chronicle of 10 September reported that ‘The game on that part of Tiptoft Manor leading from Harston Swan to Hoffer Bridge on the right hand side of the road being intended to be preserved, qualified gentlemen are requested not to sport thereon, and all unqualified persons found sporting will be prosecuted’.

A scene of tragedy

The brook was also the scene of tragedy. The Cambridge Independent Press of 31 July 1914 began its story ‘Considerable sensation  has been caused in Harston and neighbourhood this week by the tragic discovery in Hoffer’s Brook of the body of Miss Sarah Elizabeth Timbers.’. Apparently Miss Timbers who was staying with the Hays family in the Old House went for her customary walk on Monday morning and was missing until her body was found in the brook on Wednesday evening. Her body was found two-thirds of the way under the bridge. There were no injuries. A verdict of death by drowning was returned with no explanation of how she got into the brook.