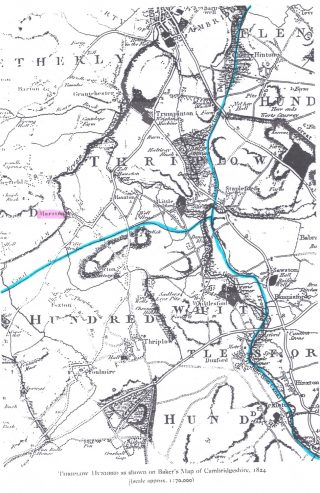 A new canal to link ports of East Anglia to London

There was almost a third water course in Harston.

Lord George Duckett who owned the River Stort navigation canal wanted to build a new canal which would ultimately link the ports of East Anglia, particularly Kings Lynn, to London via Bishop’s Stortford. This would replace the long, costly sea journey around the east coast and into the Thames estuary.

In 1778 it was pointed out to the Common Council of the City of London the public advantage of making a canal from Bishop’s Stortford to Cambridge. Their engineer surveyed a route in 1779-80 which he reported as ‘very practicable’. A route of 28 miles from Bishop’s Stortford would join the Cam a few hundred yards below Magdalen Bridge, the location of Cambridge’s commercial wharves.

Then followed about 30 years of discussions, meetings and lobbying about the project and many ‘big guns’ of the day were involved in the arguments. Those against included The Corporation of the Bedford Level stating ‘the plans were promising no public good, but threatening much injury to the Fen-country … and that the City of London had interfered where they had no property.’ Most vociferously against was Lord Braybrooke, owner of Audley End through which the canal would pass.

Those in favour included John Montagu, Lord Sandwich of Hinchingbrooke and Sir Philip Yorke, 3rd Earl of Hardwicke. Also in favour was Rev William Leworthy, vicar of Harston who, in 1810, wrote letters to Parliament supporting a canal passing through the village. He said ‘one horse and three men on a canal could move the same as sixty horses & ten men by waggon.’

As a result, a revised route to overcome some of the objections was devised but now this was objected to by the Cam Conservators, the University, mill owners on the Cam, and the major landowners whose property and views would be disrupted. Further routes were explored but eventually the original proposal was agreed upon but extending it to join the Cam at Clayhithe, near Waterbeach; and add the branch from Sawston parish to Whaddon.

The map shows the route of the main canal and the Whaddon branch as it passes through our area, marked in blue.

Much opposition continued, inside and outside Parliament but eventually, in 1812, an Act was passed:

The act set up a company of proprietors who would raise the funds and lay out the route and the works needed to supply the canal with water. It also stated restrictions such as not to make any works within the park of Lord Braybrook at Audley End or to take water from his streams. Also the streams which fed Hobson’s Conduit were ‘to be kept from injury or diminution’. The act also stated how much money needed to be raised before work should start. However, money was not forthcoming and Lord Duckett introduced a second Act, passed in 1814:

‘to alter and amend an Act made in the Fifty-second year of his present Majesty, for making a Canal from the Stort Navigation, at or near Bishop’s Stortford, to the River Cam.’

This would have permitted the start of construction between Clayhithe and Saffron Walden, and the Whaddon to Sawston branch, using the money raised. However, with the opposition entrenched and funding lacking, the project never got off the ground.

The Sawston to Whaddon branch was to start south of Great Shelford to pass to the east side of Harston crossing what we now know as London Road and Station Road. Then it would cut across the A10 just beyond the Foxton level crossing, then on to Shepreth, Meldreth and Whaddon. The estimate for this section, including an aqueduct over the Granta River, was £44,848.

The route is now occupied by the Cambridge – Royston railway line. If things had been different I could have been looking at a canal from my garden rather than a railway line!