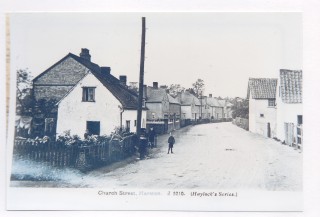 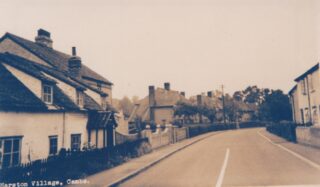 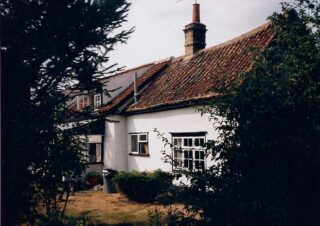 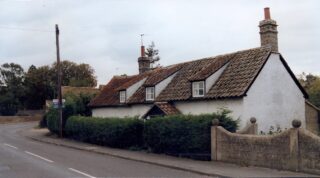 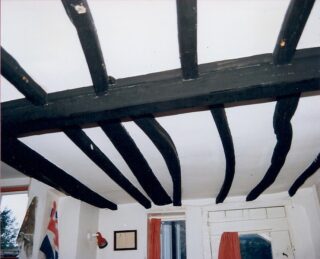 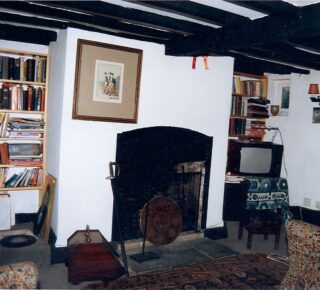 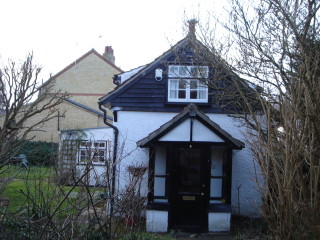 2014 No 5 Church St end porch and conservatory behind
(Griffin) 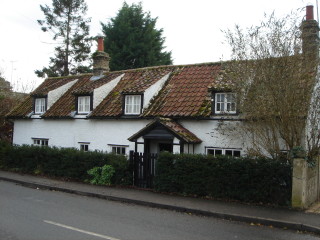 Originally two cottages, they were part of William Long’s ‘Harston Estate’ auctioned after his death in 1893. The sales brochure description was ‘Two freehold cottages with gardens. Lath & plaster & tiled & thatched. Each containing 4 rooms in the respective occupations of Northrop & Littlechild, yearly tenants, at rents amounting to £6 18s’.

Much changed & extended over the years, the series of photographs shows the additions of dormer windows (hence the name given to the cottage), doors, porches & additional rooms.

In the 1920s Dormer Cottage had just one dormer window in the roof but another one, then another was added in the 1930s. As the two cottages, probably a larger one to the right housed two separate families they would need all the roof space they could find for bedrooms.

In 1990 Melanie Cash collected most of the following information on Dormer Cottage for her history project.

It was called Dormer Cottage as it had three windows at the front and two at the back letting light into the upstairs so it can be lived in, as can be seen in the 1990s photos. A later photo shows another dormer was added to the front, making four facing the road.

The roofing material is pantiles but it earlier had lighter material – a thatch. The roof now dips suggesting the timber framework cannot take the strain. There is also a contrast in the age of the tiles. To the left of the house the tiles are a much brighter colour and have no lichen growing on them. They have been replaced more recently. Gaps in the tiles can be seen when looking up through the attic.

It was originally two semi-detached cottages and where the division is there is a 27cm bulge at the front and a 9 cm bulge at the back- as shown in photos. The smaller cottage side looked to be older than the other larger one.

Two elderly residents of Church St, Mrs Evelyn Pearce (68) and Mrs Rose Chapman (84) told Melanie there were probably three families/cottages originally, when Mary Greene owned it, with Mr & Mrs Ives & 6 children living in one, Mr & Mrs Neaves in another and Mr & Mrs Wherts in another. The History Group records of occupants given below show that this may have been confused with the old row of cottages  owned by Helen Greene on the other side of the road that housed three families until they were knocked down in late 1930s/early 40s.

The house has a gable end with catslide roof sloping to the back (1990s photo). The 1990s photo also shows the old wall in front of Stag Cottages most of which is no longer there. There are two chimneys built in the local white brick; one within the house through the ridge and the other in the gable wall – providing fires to cook on in the original two cottages. The chimney in the gable wall isn’t central and the roof comes up higher on one side.

A plan of the rooms on the ground floor and upstairs can be seen in the attached file below.

The cottages were built around 1750 and are clearly shown on the 1799 Inclosure map. They had timber frameworks which can be seen in all the downstairs rooms and one room upstairs; the rest have been covered with plaster. The beams in the kitchen are rather extraordinary in the way that they curve round. The ceiling throughout is low and at some stage the floor has been dug out because there are a series of steps down into the house. The front doorways are very small and probably original but the interior doorways are much higher and have been replaced at some stage, possibly when the floor was dug out. Because the cottage is so low it used to flood in the past.

None of the timber framework is visible from the outside because the original lath & plaster walls are covered with stucco.
The two porches have been added on during the twentieth century in keeping with the house style. The conservatory added on the back around 1960s has a corrugated Perspex roof. This and the eastern end porch can be seen in the 2014 photo.

The fireplace was off centre and one side was much wider. Either side of the chimney breast there are recesses but the fireplace itself is shallower – maybe with something behind it. The chimney was bricked up in the local stone and is very black inside – maybe about 100 years ago – see photo.

1893: Northrup & Littlechild families  (from sales document)
1910: Northrop & Swann families  (from land use map)
1930: Alfred Ernest Collins & family lived in one of the cottages but left by 1932 after the house was condemned as it would flood as it was below ground level