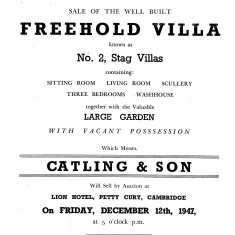 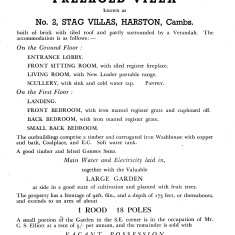 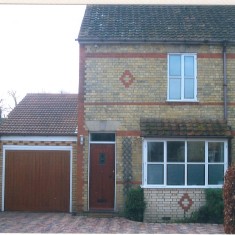 No 7 Church St Stag Villas gets a garage
(Deacon)

The land upon which Nos 7 & 9 Church Street stand was part of William Long’s ‘Harston Estate’ which was auctioned off in 1893 after his death. The sales document stated ‘ Freehold property comprising pasture field of building or accommodation land containing 1 acre, 0roods & 36 poles (more or less). With extensive frontage to the Haslingfield Road in the occupation Mr J Ashby, a yearly tenant at £4 per annum. Bounded on the North East by the Haslingfield Road, on the South East by Lot 11( now Dormer Cottage), on the South West by property of Mr Northfield and on the North West by property of Mr Ives

The semi-detached villa was built in 1904. In the 1911 census the White family are the occupants – John William, a railway signalman, his wife Mary, daughter Ellen age 36 an assistant school teacher and daughter Ada, age 33 a dressmaker.