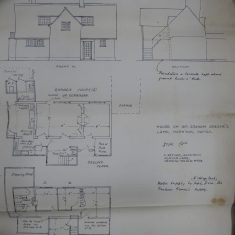 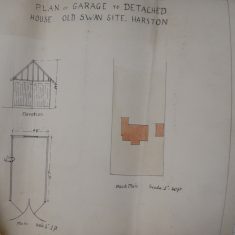 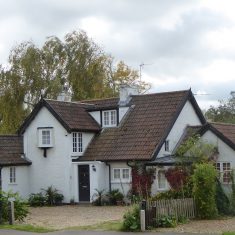 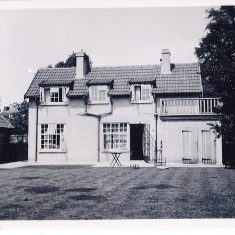 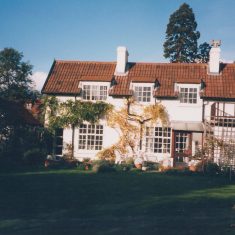 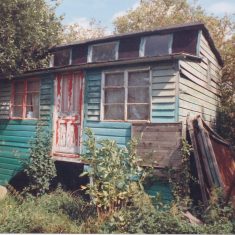 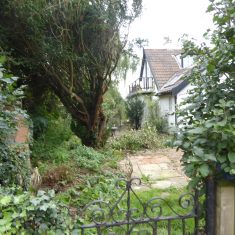 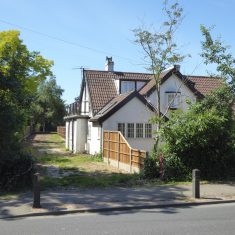 After the destruction of the Swan Inn in 1927 plans were put in for building a cottage on some of the land by Sir William Graham Greene of Harston House in addition to two sets of council houses. Sir W Graham Greene had much input into the architecture as he wished to keep the character of the old historic centre around The Green (formerly The Swan Green). The architect was E Bentham.

The house, called Orchard Cottage, was built for his sister Helen Catherine Greene (1870 – 1960) and some of the design may have been influenced by her Swedish friend Signe Laven who had had a chalet type house with balconies built on the hill of Newton Rd. The early 1930-40s photo was taken by Signe Elfrida Laven and shows balconies, unusual in the architecture for this village. The plans also show a sleeping deck.  Peter Parker in his book about Christopher Isherwood: A Life writes ‘Helen built Orchard Cottage – in fact a six-bedroom house – opposite the end of the drive to the main house’. The sleeping deck may have counted as a bedroom- perhaps ideas of sleeping in fresh air coming from Signe Laven who was a physiotherapist involved in gymnastics. Helen Greene was also involved in physical education.

There was also a hut in the garden in the orchard. Local stories say it was a nuns retreat, but other residences in the village also had huts in gardens where a member of the family slept who was suffering from TB and fresh air was thought to be beneficial.

From the plans and the more recent photo of the front of the Cottage you can see there has been an extension to the east side of the house and the house has been joined to the original garage to the west side.

The grounds used to be well landscaped, originally with an orchard too, but sadly recent development has removed much of this and two new houses have been built in the grounds behind the cottage. The photos show the removal of part of the garden to the east and the new driveway to houses at the back. Part of the house and balcony are likely to be removed as part of the planning conditions.