You are here: Home>People>Ida Elizabeth Farrington 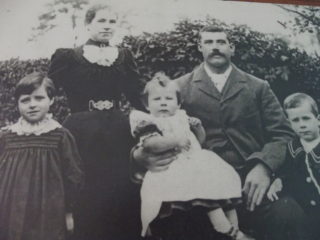 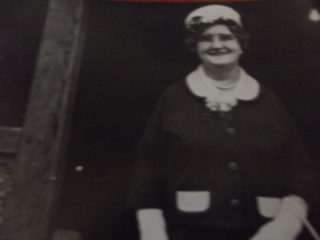 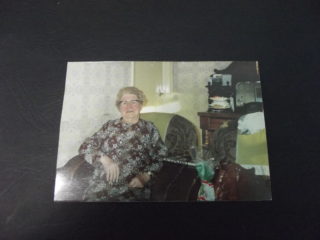 Ida’s main schooling was in Orwell. Her father George Farrington was a policeman and in 1908 the family moved to Chippenham Cambridgeshire where Ida completed her schooling. In 1916 the family moved to Kirtling where her youngest brother Bernard William met Grace Allard but that’s a whole new story.

In 1921 George retired from the police force and purchased 7 Church Street Harston also known as Stag Villa. His superannuation was pounds 165.20.5. per annum.

Ida never moved away from home (to my knowledge), assisting her parents which I believe was fairly common in those days. Prospective husbands were fairly thin on the ground thanks to WW1. She looked after both parents in their later years nursing them to the end They are buried in Harston Cemetery.

She always rode her bike and in my mind I can still see her coming to visit. She was a much loved Auntie, friend and confidant to me (Wendy).

My sister has added the following:

My name is Mary nee Farrington the eldest child of Bernard & Grace Farrington and was born in Fleece Cottage, Button End, Harston on November 7th 1930. My memories of Aunty are very fond ones and whenever I could I would go to Grandma’s and Aunty Ida’s as they spoiled me rotten.  My only regret is I asked Mum if I could have piano lessons with Aunty but she refused to let me, hence I never did learn.  I think there was some sort of animosity between my Mother and the in-laws but no explanation was given to me as I was just a child. As I grew older and could please myself, I would often be found at Stag Villa and continued to go and see Aunty after both my Grandfather and Grandma had passed away.  My Grandchildren call me “Grandma” as that was my wish and still do so even now they are grown up.

She died on Anzac Day 26th April 1990 in Brookfields Hospital, Cambridge aged 94. Her ashes are interred at Harston Church Yard.

Ida was very musical and was often mentioned in the paper of the day for her parts in drama and operas often played out in the Harston Vicarage garden. She played piano very well and was able to teach up to a certain grade. She supplemented her income this way. Many is the Harston child that could play piano thanks to Miss Farrington.

Ida loved her church (All Saints) and attended every Sunday and it was a pleasure to hear her beautiful soprano voice hanging on and on to the high notes.

I will finish with an extract from The Harston Parish Magazine 1990 from one of Ida’s pupils.

“Living out in Africa it is especially nice when I can come back to Harston and see some of the familiar old faces that I have known since my childhood days. Sadly, each trip one or two are no longer there. It is with particular sadness that I have just heard of the death of dear old Miss Farrington.

I started piano lessons with Miss Farrington twenty years ago, and in 1976 with her guidance I obtained a merit in Grade 6. I have kept up the piano since. I was regularly intrigued and amazed by her fascinating tales of life in the ‘old days’ and of her singing exploits. In recent years, when on leave I have called in on her with Emma my dog. I would tinkle out a favourite tune for her from times past, while she prepared coffee and cakes, with Emma’s help in the kitchen. Then we’d sit and have a long natter reminiscing over the olden days.
At my school in Africa, a kind of cycle has been completed, as I now teach piano to youngsters, and so the wheel turns.
When I heard of her death I sat at the piano and played the ‘Moonlight Sonata’. As the dulcet and melancholy tones rang out it was not without tears that I contemplated what a long and enriching life she had, and that incredibly seemingly, it was finally over. She was a remarkable character, whom I had come to regard as a grand old lady of the village.
Goodbye Miss Farrington from your affectionate pupil.
Jeffrey Hearn