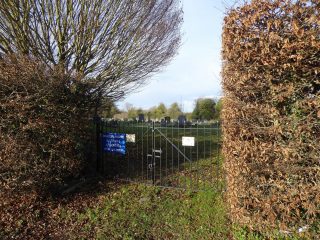 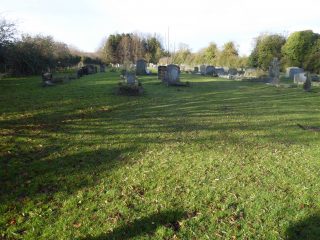 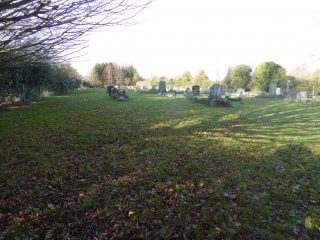 By the early 1920s,  it was becoming increasingly clear that the graveyard at the parish church would soon have reached capacity. At a meeting of the Parish Council on 27 Feb 1925 it wasrecognised that the churchyard was overcrowded and at their next meeting on 25 July it was agreed to approach local landowners to get a price to purchase some of their land for a new burial ground. Those approached were Mr Whitehead who had land to the west of Harston House, Mr Gee with land at the back of Riverdale Cottage and Mr Phillips with land at the corner of Royston Road.

However by the meeting on 24 July 1926, the Parish Council had been advised that Jesus College had purchased Beech Farm and its lands from Mr Gee. It was agreed to ask them if they would sell 1 acre for a burial ground. Discussions with the College continued until at the meeting on 23 April 1927 when the Council agreed to purchase the land.

By the end of 1928 the ground was ready and at the meeting 14 Dec 1928, it was agreed that there would be 248 graves and the burial fees were agreed. The first burial in the burial register was that of John Robert Tuck on 29 January 1930. It appears that 1st October 1931 was the first day on which burial plots could be purchased – the Ashbys of The Queens Head and the Smiths of Harston Mill purchased two plots each on this day, the first of which was used in 1939 and the last in 1978.  The early purchasers of plot can be seen here Purchase of Burial Plots

Maintenance of the burial ground

By 1969 the cemetery was in a deplorable state with Mr Crow’s hedge bordering cemetery overgrown– so the maintenance was put out to tender.  May 1969 Mr E E Jeaves of 4 Beech Farm cottages, Button End, was asked to continue to be cemetery caretaker but was unable to look after the cemetery during the following two months as he was very busy during fine weather harvesting beet.  Jul 1969 Mr B Sewell, who used to be Cemetery caretaker, was asked but he said he found it too much to take on. Mr H Padwick of Cambridge took the job for £72 a year from 1969, ok’d by E Lindgren.  Mr Hunt of Melbourn maintained it from 1971 with the original clearance for £40, then for about £75 a year. But there were problems again by 1978 as the advert below shows.

Is there anyone in the village interested in taking on the job of maintenance to Harston Burial Ground in Button end? The job is usually done from March/November and consists of cutting of all the grass and hedge and the weeding of the path and turnaround at the end of the Burial Ground. Payment by negotiation. If anybody is interested please contact me on 870286 (18 Queen’s Close), before 13 March when the next Parish council Meeting is to be held.

This was obviously successful as records below show.

to be included in the parish magazine (organised by Mr S Nicol at that time):

During this day and age when the youth of the world are often slated for their lack of interest and community spirit, it is with the greatest of pleasure that the Parish council accepted the offer of the Harston Scout Troup to take over the maintenance of the Burial Ground. This is a mamouth job for which their rules and regulations permit no payment and is being undertaken in a true community spirit and we should be proud of the young lads of our village for taking this on. This quiet corner of our village is a very special spot to a lot of our residents and I am sure they can only be delighted at the transformation that is taking place. A big ‘thank you’ from the Parish council and all the village folk to all the Scouts helping to keep this peaceful place tidy and well cared for.

And yet in March 1985 in the parish magazine a note gave thanks to Mr Day who had looked after the burial ground in Button End for the last year and kept it very neat & tidy.

A notice had been put in the village magazine  by Oct 1994 asking for volunteers to help with improving the appearance and setting of the cemetery and had number of replies. Jeremy Symes was one. Gerald Ives also helped. Jane Martin was parish clerk at the time and 13 December 1994  meeting to discuss proposals to re-landscape the Burial Ground was led by Mr Paget.

South Cambs did much work in 1995 to get a  Countryside Tree and Hedge pack from Cambs County Council and had submitted plans for their location in Harston Cemetry. The planting scheme was put forward by Val Ford, Jed Roberts & Peggy Johnson (Hope Cottage, Button End). The Council agreed to fund the scheme for £350 as long as they made sure they didn’t impact on (unmarked) graves.

During 1997-8 old evergreen shrubs were removed and 18 trees purchased, along with a gift of 50 m of hornbeam hedging & 25 m of native hedging. During August 1998 Muntjac deer damaged the Amelanchier tree up to over 1metre so emergency protection was set up. More trees were to be planted as part of the 5 year project and they were encouraged to fill the roadside boundary with trees along the fence. ‘Plantings of Jan 30 and Feb 7 1998 are in place to include planting of the hedge (gap), the laying of the hedge at the far end of the burial ground and the planting of the commemorative trees’. Summary by Peggy P Johnson.