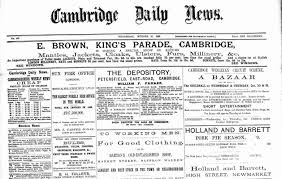 To be sold: an estate at Harston consisting of a mansion house, large barns, stables, malting, 2 dove houses & other offices & homestall, garden, orchard, 345 acres (‘statute measure’) of arable (meadow + pasture). Also the Paramount Manor of Harston producing annually an average £41 18s from fines + quit-rents. Also, a ‘valuable Water Mill, one of the best established in the county’.   All freehold, tithe-free, land tax-exempt, inclosed in a ring fence. Apply Mrs Pemberton, Cambridge. or Mr Shepherd, Oundle after 1/4/2000. Also to be sold by auction at The Swan on 7/4/2000, 4-5 pm:   Lot 1,  is a freehold messuage + ground (up to the turnpike) lately allotted thereto, available Lady Day 1801; Lot 2 is a new allotment of freehold pasture land ca. 4 acres near the turnpike. Apply C. Pemberton.

The commissioners (as above) …..give notice that we have heard & determined all the objections to allotments & exchange brought before us, & we therefore require ……  persons to accept the prospective allotments etc, on or before 20/4/1800, except such as are sown with wheat, until harvested (etc)…….We order…..that……..all… Messuages, Cottages, Tenements, Old Inclosures, & Heriditaments & agreements…….rack rent……..shall cease and be void as from 5 April 1800 (etc). All persons who think themselves entitled to (such) satisfaction are to state this in writing forthwith, to Mr Pemberton, solicitor. Signed, 5/4, as above.

Auction at The Red Inn, Cambridge on Fri 27/6/1800, 11-12 am: Estate of Thos Pate Hankin Esq in the parishes of Newton, Little Shelford & Triplow, now occupied by Mr Hurrell of Newton, with possession of the fallows immediately and of the remainder next Miuchaelmas.    Lot 1:  Farm house & buildings, as a square farm yard in Newton…….       Lot 2: Baggot Wood, Baggot Close + the new Allotment all adjoining, 31 acres, 3 roods at Harston on the right hand sideof the road from Harston to Newton – the road having on the east,  the estate of Mr Allen, on the south, that of Colonel Wale and on the north, that of Mr Whitechurch . It is tithe-free; Mr Hurrell, the tenant, will show the premises.

Alexander Moore, surgeon and man-midwife at Harston thanks his friends and members of the public for their support during his short residence at Harston and solicits ‘continuance of their favours’. Drugs & sheep ointment sold retail.

Birth of triplets (3 girls) to a poor labourer at Harston, ‘all likely to do well’. (She already has 4 children, of which one is ‘an idiot’).

Sale by auction: by Philip Isaacson (at The Coach & Horses, Harston), on Friday 10/7 at 6 pm: Sale of The Coach & Horses Public House with a pasture close, ca. 1 acre, with a barn, stable & other appurtenances occupied by James Edwards. Copyhold, Shadworth Manor, apply Mr Gee, attorney, Cambridge.

Death of Mr William Allen, miller of Harston. He died suddenly and unexpectedly.

T Cockett auction of freehold & copyhold estates, some growing cinquefoil, to be held at The Swan on 9/6/06, at 3 pm. 9a 3r 24p of growing cinquefoil, the property of Swan Wallis of Harston, in 5 lots. Also, 2 large well-timbered messuages occupied by Widow Covill & Jonathan Docwra, plus 2 barns, a stable, cow-house, yards, large gardens,, orchards of fruit trees, an ozier holt and arable land, 3a, 3r, 5p. Estate will be divided into 3 lots. To be viewed by leave of the tenants.

Assize intelligence: the following gentlemen now compose the Grand Jury for the County of Cambridge: Rt Hon Lord Charles Somerset Manners, Rt Hon Charles Yorke, Benjamin Keene, Marmaduke Dayrell, John Trotter, George Leeds, Richard Eaton, Henry Gunning, George Milner, Ebenezer Hollick, Thomas Fisher, Edward Gillam, John Purchas,  P. Beales, Thos Thurnall, Chas Finch, Richard Comings, John Hibbert, Chas Madryll, John Mortlock, John C. Mortlock, Richard Foster, Peete Musgrave Esqrs.     Among the cases tried at these assizes were:      1)   Thurnall vs. Littell  –   the plaintiff is a tenant of the defendant at a farm in Harston under lease, wherein is a proviso that if Mr Littell, his heir, or assigns, should at any time during the demise, wish to occupy the mansion house, gardens, orchards, stables, or Hall Yard Close, giving 6 months notice before 10/10 last, (tenant should quit). Defendant gave the plaintiff notice on 5/4/05 for plaintiff to quit on 10/10/05, which he did, but instead of Mr Littell coming there to reside himself, he let the premises. It had been agreed that the plaintiff’s son should have possession of part of the house on 11/10/05 and the plaintiff should have the close & premises occupied by Robert Tuck, and from Michaelmas 1807, the defendant should revoke the lease proviso ………(etc.). Each party to pay own costs; counsels & attorneys for defence & plaintiff are listed.

Letter to The Cambridge Chronicle from Thos Bridge Littell, 13/8/06. ‘Although I believe it is not usual to insert in your paper, particularly under the head of ‘Cases Tried at the Assizes’, cases which have not been tried at all……..my name mentioned……..particulars of the Rule of Court (the only authentic document to be referred to upon such an occasion) seem to have been lost sight of, and ex parte assertions only, substituted for it. I shall trust to your impartiality to insert the subjoined statement of those cases which, upon reference to that record, will be found to be correct:    LITTELL v. THURNALL – An action charging the breach of covenants in a lease, to one of which charges defendant had not pleaded, and had consequently suffered judgment by default; this was compromised & satisfaction entered.   THURNALL v. LITTELL  – was a declaration in ejectment, to recover possession of a mansion –house, close & premises which plaintiff had quitted under notice from the defendant, and after he had been informed, in the presence of his son, that he might continue to hold them on the same terms as before: and that if he quitted them they would be let  –  this was compromised by defendant agreeing to give possession at Michaelmas 1807 (when the terms of the present tenants should be expired) and by the plaintiff agreeing to pay double the rent he paid before (for the premises) during the remainder of the lease. Each party to pay own costs, as by reference to the rules of the court will more fully appear.’

An alphabetical list of names of persons to whom certificates for killing game have been granted (11/806 – 3/9/06), (provided by) by Christopher Pemberton, Clerk of the Peace……ca. 200 names which include (from Harston):  Allen James, miller; William Leworthy, clerk; Thomas Thurnell, gent. (Also, included as ‘not being a menial servant’, William Jennings, by Caius College, for Buristeads in Gt. Shelford.

Notice: ‘A Caution to the Public: Whereas I, Swan Wallis of the parish of Harston did, on 6/8/05 and 15/8/05, send by John Palmer, carrier & higler, 24 doz. apricots, which he entrusted to the care of J Reeves, salesman, of Spitalsfield Market, who did, contrary to the principles of equity, at the instigation of Palmer, keep back part of the price, I therefore advertise the conduct of these men …..  the public….should guard against the intrigues of such carriers and salesmen’ (dated 13/9/06).

(Letter): ‘I, Christopher Cornhill of Harston, do acknowledge to have spoken many things disrespectful of Mr William Tuck of Harston….. falsely accused him of stealing turnips (etc)…. He intended to bring an action against me, but by my acknowledgment of my folly of such untruths, he kindly forgives me, for which I humbly thank him (etc).   Signed (by a X-mark) and witnessed, 6/10/09.